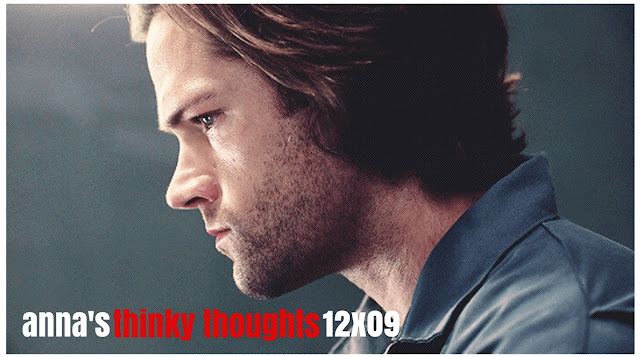 Well I gotta say, I don't think there's a finer way to celebrate KM than by showing Episode #250 which totally kicked it in the ass.  I think Kim would've been so proud.  In my humble opinion, this episode was definitely worth our hellish wait.  What a great start to the second half of what I feel to be an amazing S12.   That People's Choice was most definitely well deserved. 🏅

Can I just say "finally".  I've been waiting 12 years to hear AC/DC's "If You Want Blood".  Thank you SPN, thank you for finally getting that song, which I find so very appropriate for the Winchesters.  My SPN I tunes playlist is so happy now.😊

I just finished my re-watch and I loved it just as much the second time as I did the first time. What an exciting hour of television.  Winchesters, the epitome of what heroic is all about. Everyone involved did a super job, but as I dip my feet in the shallow end of the pool, I want to say that the boys looked incredibly hot and were totally badass sexy.  I ogled my tv the entire time. 😍 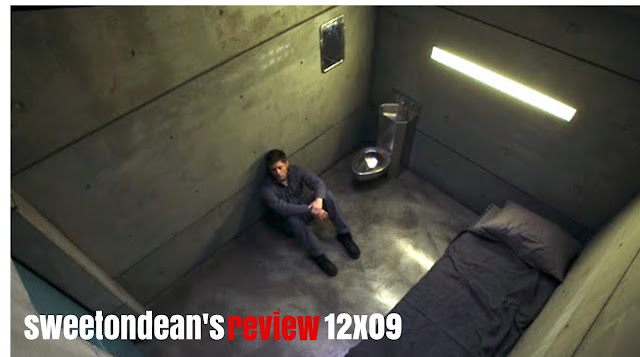 Welcome back Supernatural! Happy end of hellatus! And happy 250th episode! In a week which saw the anniversary of the death of beloved director and executive producer, Kim Manners, the show coming back with such a fantastic episode seemed a fitting tribute. Everybody truly did kick it in the ass. And 250…perfect. “First Blood” was another shining example of our Show, that in its 12th season really has no right being this excellent, but I’m super glad it is!

For me, this was one of those edge of your seat episodes, one of those ones that without even realising it, you suddenly notice that you’ve creeped forward in your chair and you’re perched precariously on the edge, ready to tumble if the Winchesters do. Which of course they don’t. Because hey, those Winchesters were never going to tumble, because of my gosh, they were the baddest badassed dudes I know them to be. Dangerous, deadly, badassed and massively hot! Hot, hot, HOT! Sorry but they were and I ain’t gunna hide the fact that a couple of times I thought I was going to spontaneously combust from the hotness! I may have omitted little squeaking noises, and by may have I mean I did! I like nothing better than in sync Winchesters. Whether it’s emotionally, as one knows exactly what’s going on with the other; whether its frivolously and the talking at the same time thing which is always adorable; or whether it’s in battle, subtle hand movements, nods of heads and wordless glances telling each other exactly what to do. A well oiled, terrifying team. Sometimes I forget how terrifying they can be… If I didn’t love them so, they’d scare the shit out of me! 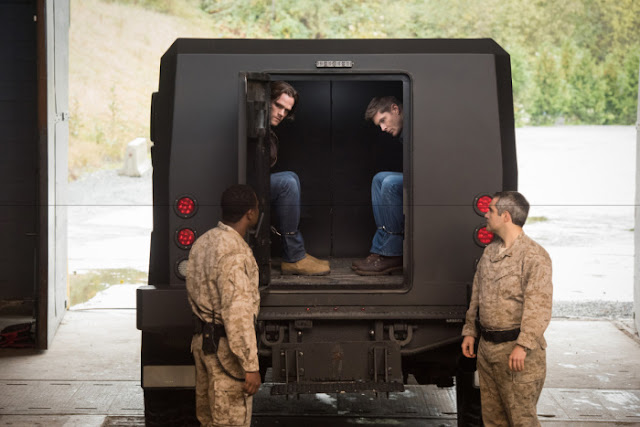 First off WELCOME BACK!!! We did it. We got through another hellatus! We are awesome!

Secondly DON'T FORGET THE SHOW IS AT A NEW TIME! 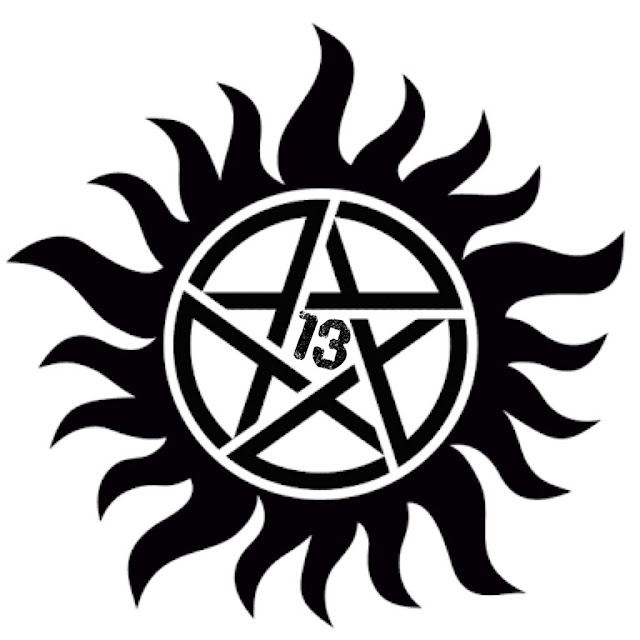 Yes as most of you have probably heard, Supernatural got a very early pickup for season 13! Go show! The renewal was announced in amongst other CW shows as part the the CW TCA panel.

Arrow, The Flash, Supergirl, DC’s Legends of Tomorrow, Supernatural, Crazy Ex-Girlfriend, and Jane the Virgin have all been renewed for the 2017-2018 season, the network announced at the Television Critics Association’s press tour on Sunday.

“Over the past several seasons, The CW has built a schedule of proven performers, from our lineup of DC superheroes, to critically acclaimed comedies, to sci-fi dramas,” CW President Mark Pedowitz said. “Early pickups of these seven series now allow our producers to plan ahead for next season, and gives us a solid base to build on for next season, with original scripted series to roll out all year long.”

Supernatural‘s renewal for season 13 continues its streak as the longest-running show in CW (and The WB) history. Previously, 7th Heaven held the honour, ending after 11 seasons.

And Mark Pedowitz, head of the CW, once again reminded us that the show has his support at the network... 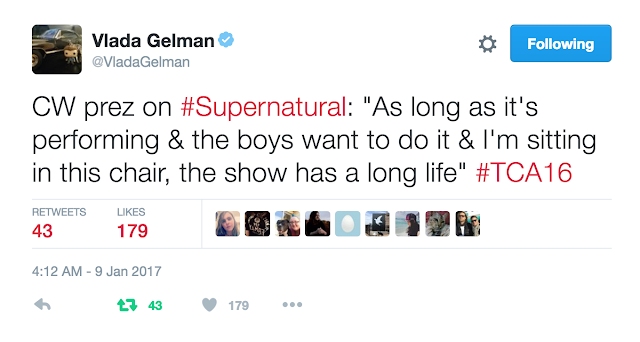 CLICK TO READ MORE »
Posted by sweetondean at 21:33 No comments: