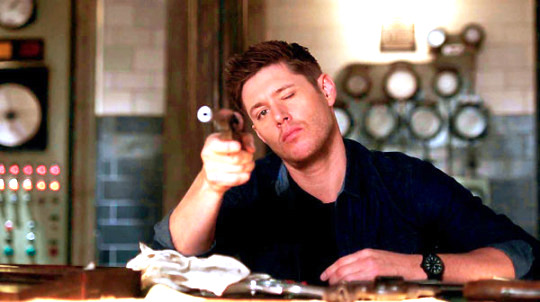 Oh how I loved The Memory Remains. It was like a little horror movie! Creepy and cool and super fun. It was a fantastic monster hunt where once again, the monster was not only a monster, but a human - basically we got a two for one, a monstrous human and the monster he controlled. Yep, who is the greatest monster in this situation - a powerful theme of Supernatural through the seasons, and one so relevant to this year's arc with the British Men of Letters, and the devil baby. I ended up feeling sorry for the poor old god, being locked up and starved so that it would grant its captures wishes. The monstrous human turning the monster into more of a monster than it may have been if left to its own devices. Kinda like that werewolf that Claire came across. 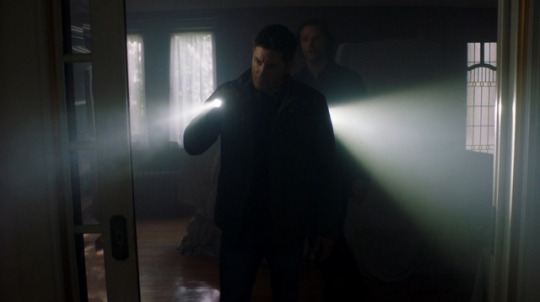 There was so much to love in this episode, from the super fun dialogue-which was so on point with the brothers' banter, to the creepy sheriff stuffing a ferret (was that a ferret?). The hunt scenes with the torches, which were so much like the early seasons…creeping through a building, torchlight shining into camera lenses. I loved the shot through the goat eyes, the flapping painting plastic, which for some reason will never not make me feel like something awful is about to happen! The slaughterhouse and the meat hanging on hooks in the cool room that Dean had to look around as the god hid from and stalked him. So many familiar and awesome horror tropes! John Bring did such a great job with both the story and the script, giving us tingles in all the right places…both from the scares and from the feels!

ALL OF THE FEELS! This was a broment-a-palooza episode! 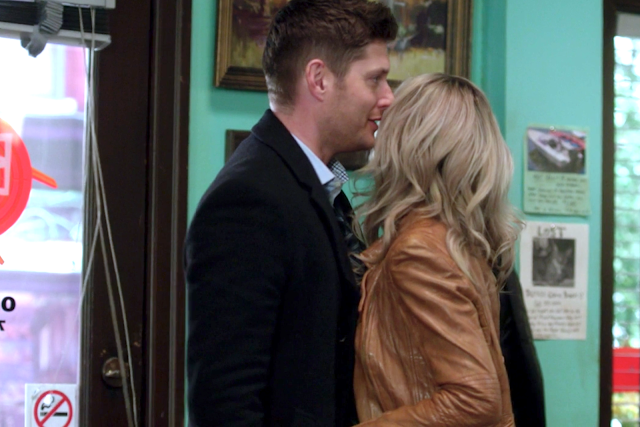 I loved that Dean hooked up with the waitress in the diner, and  I loved that she flirted hard back at him, because, um, YEAH! And really - how happy he looked that she finally noticed him! I’ll never quite recover from the loved up, smooshing up against the girl, tie all askew, morning after Dean. Never. Ever. I bet he was all warm and…. oops sorry! 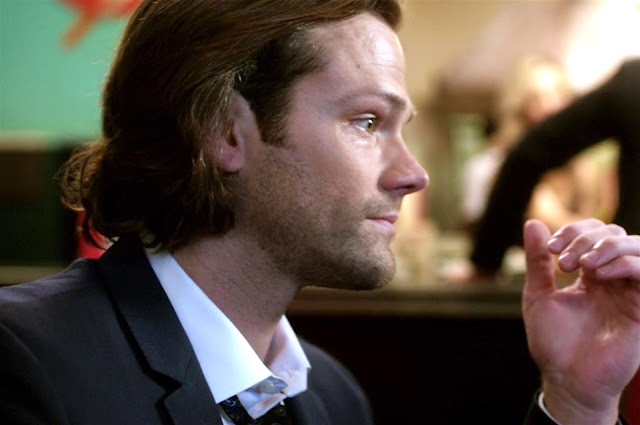 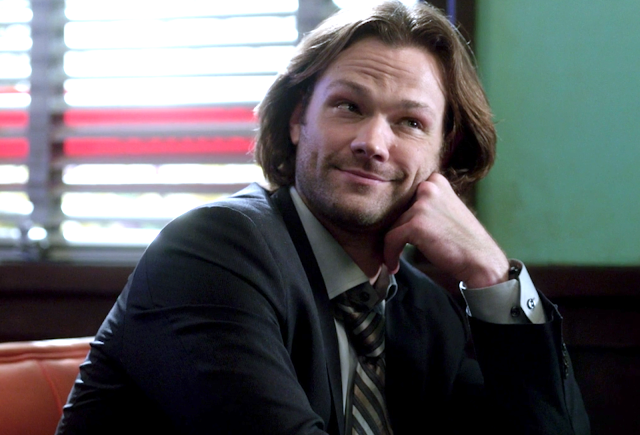 I adored the affection Sam showed Dean, praying his big brother wouldn’t use the worst pickup line in history, and his face when Dean did! Brilliant work by Jared in that scene - saying so damn much whilst saying nothing at all. It’s these little nods to how well the brothers know each other and how they are equal parts amused and exasperated by each other that give me life! I swear Sam, head resting on his hand, grinning like crazy as he looked at Dean’s girl, and happily putting up with hungry as a bear Dean beaming with contentment, made my heart go zing-a-ling. Sam genuinely happy to see his brother genuinely happy made me so, well, genuinely happy! 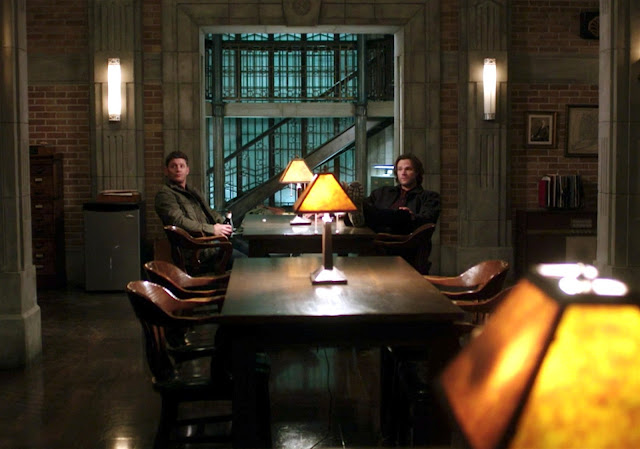 I keep reading people saying that they just want more of the brothers, more about the brothers, they just want to see the brothers doing the brotherly feels thing, and I am baffled by this. For me, the strongest part of season 12, a season which I think has been consistently delivering great story, is the brothers and their glorious relationship! We have never before seen them so stronger together, so unified, so trusting of each other, so harmonious. They are talking, sharing, joking, smiling, open and obviously loving and affectionate with each other. This is a season with no big lie (Sam’s brief deception forgiven as I always felt he was working up to being honest), no sword of Damocles hanging over them as one brother prepares to give the ultimate sacrifice, no one brother wanting to get out of the life, no supernatural compulsion threatening them from the inside. This season has been 2 grown men, 2 brothers who have learnt through mistakes and experience that no matter what, their brother always has their back. They’ve learnt and now understand, that this life forced upon them is a life they are both okay with - even if maybe they dream of one day hanging up their guns, they now dream of doing it together. They’ve figured out their place in the world, it may not be about legacy, but it is about saving people and leaving everything a little better for having been here. It’s about 2 brothers sharing in something no one else will ever really understand, a history that has joined them forever in a quest, and created a bond that no matter what happens, no matter who tries, it cannot be broken. It’s about 2 brothers, doing the work, looking out for each other, being emotionally open and available, being respectful, being comfortable enough to let the other call the shots. It’s about small smiles, eye-rolls, teasing, little moments of joy and exasperation that come with knowing someone better than anyone but you could. It’s about walking instep, sitting shoulder to shoulder, talking in “us” and “we”. It’s about remembering who they are and what they mean to each other, and carving that out to leave a mark that means something to them, even if no-one else knows or understands or remembers.

Personally, I don’t need hugs, I need all of this. Thank you Show, for giving me the brothers I’ve always hoped they’d become, for letting them grow up and into their relationship in a real and truthful way. Now please refrain from ripping my heart out because we can’t, and the Winchesters certainly can’t, ever be this happy! Lord…I feel something awful brewing in the wind.

The British Men of Letters infiltration and bugging of the Bunker gave me the weebs. That invasion into the Winchester’s private, personal, safe space felt like the ultimate deception. Jokes aside - and there were some crackers - going through Dean’s draws, stealing his prized photo of Mary, which we know he’s carried with him for so long…all the the nopes in the world can’t cover it. I found myself wondering how long until Dean would notice - or would they notice the bug when Dean goes to put the gun back in its under table holster - because it looked like Ketch put that bug right in front of where Dean pulled the gun from.

Either way - it will happen, and when it does, the British Men of Letters’ future will be sealed…and I wondered if the Bunker will also be sealed? No longer the haven they once felt it to be, no longer a place they are safe from the world, will the brothers turn off the lights and close the doors? Will they be back on the road, possibly on the run? I couldn’t help but feel like there will be a change of relationship between Sam and Dean and the only home they’ve ever really know outside of Baby. I was filled with sadness at this invasion and what I feel it will mean to the boys. It will go beyond the anger of being spied on. I started to wonder if the homey tones in the Bunker, and all the gorgeous domestic moments this season have been purposefully setting something up. We’ve enjoyed this space since season 8. Will we be saying farewell at the end of season 12? Will the only U.S. Men of Letters left alive, do what the Men of Letters did back in the 50’s and abandon the Bunker, leaving it just as a storage place, but no longer a home? Baby, the Bunker, the Colt, John’s Journal, Dean's amulet have all become objects that have been given personality and a real emotional position in the Winchester’s history. We place importance on them because of what they mean to our boys. The Bunker... has been compromised. 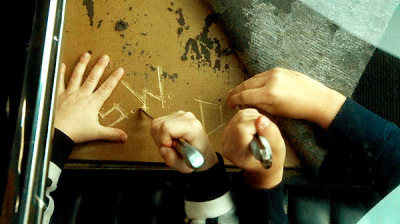 The final scene with the boys discussing their legacy and then carving their initials into the table, just like they did when they were children in Baby - their only other home…lord, how I cried…I have those initials carved into my leg in ink! I love that Dean thought to do this - their history together has always meant so much to Dean - and I love Sam’s soft smile and truly touched face as he watched his big brother etch out those letters, and then hand him the knife for him to do the same. All the feels and all the tears. It was beautiful and amazing and such a great recognition of something so important to those of us that love the Winchesters. But it also felt so horribly ominous…almost like a goodbye…the talk of dying, their legacy, whether any other hunter would live in the Bunker when Sam and Dean are gone. A-Wah! Why can’t we ever have (and keep) nice things! Or maybe I should say, why when we get nice things do we automatically start thinking that not nice things are coming? BECAUSE SUPERNATURAL, THAT’S WHY!

We’ve got a week off guys, then it’s full steam ahead to the finale! I still don’t know where we’re heading, which I like, but also kind of don’t like!

Hang in there! Thanks for reading
-sweetondean