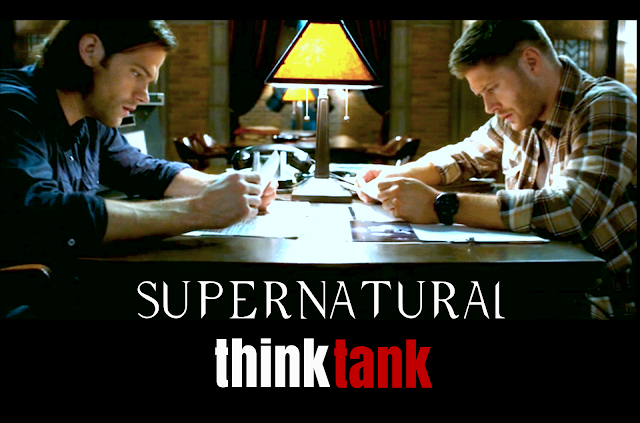 Here we go with some thinky thoughts on what happened in this week's episode of Supernatural!

I always enjoy Rowena.  I've liked her from the start, even when she seemed over the top, I knew there was more to her ...she's darker than she seems. I think she's even worse than Crowley. Crowley...now there's a BAD SEED right there. I know that Rowena wants to create her own Grand, oh wait, Mega Coven.  I can only imagine if she succeeds in that,  how truly powerful she will become and I find that notion a bit on the scary side, which I totally dig. I got a kick out of her when she was in the back seat, egging the boys on, wanting to have a wee sing song...karaoke anyone? LOL  But what stuck out for me regarding Rowena in this particular episode was her mentioning the deal she had with Sam regarding Crowley and Dean's annoyance at Sam for keeping it a secret.  It led me to ponder this.


What was Dean annoyed at? The fact that Sam didn't mention it, or the fact that Sam tried to kill Crowley?  It seems to me, as I realised it when I saw it mentioned on another thread, that Cas had told Dean to tell Sam that Rowena still had the codex and the Book of the Damned. Given that tidbit, I'd think it's safe to assume that Dean knew that Sam had some kind of deal going on with Rowena already. I mean it's pretty much a given. Secondly, and I don't want to anger anyone by mentioning this...but sad to say, as much as I do like Dean Winchester, one of his most irksome flaws is his blatant hypocrisy. We've seen it before many times. It doesn't make me love him less, but it does make me want to punch him in the nose...LOL. Dean is keeping secrets from Sam right now. A pretty big one if I dare to say so myself. I mean the Darkness told Dean they were bonded and he would always protect her...pretty important information that should be shared with his brother I think...and yet I'm not exactly seeing the sharing....so I must admit that Dean's annoyance bothered me a tad...I mean it's basically once again the pot calling the kettle black....so I asked myself.....why bother having Rowena ignite this little flame in the first place?

Was the point of Rowena doing this to start the.....we need to change notion that Sam so astutely noted needed to happen if the boys are not to repeat the same mistakes?  I mean it's not that easy to break a habit that these boys have had ingrained in them from their father since they were kids. It's hard to go cold turkey....but it's important to take the first step....Saying they need to change and then actually doing it....it's easy to forget or not realise all the steps entailed in making this change...so I have to ask myself...was Rowena's comment meant to guide these boys into taking that first step...which in their case is to stop keeping secrets.....based on the info given for next week, I can't help but wonder if  we're going to have these boys start dealing with this issue they share...and start making that change....if that's to be the case...then kudos goes to Rowena....at least my kudos...LOL

Then I also was thinking....was it the secret or was it the fact that Dean got upset that Sam tried to kill Crowley?  I mean Amara pointed out that Dean would always protect her....and Crowley, seems to be guiding and feeding Amara...So did Dean subconsciously know that Crowley was  necessary to Amara and when he found out that Sam tried to kill Crowley he was angered by it? Is the Darkness affecting Dean some way? Why does Dean even have Crowley in his contacts? Does he have some kind of dark bond with Crowley? Or would Dean just as easily kill Crowley if Amara requested it to be done? Not enough info to make any kind of decision here.....just enough info to make me wonder.....personally, the optimist I am, I'm going with option A....that it's one of the first really vital steps the boys need to take in their effort to change.

So the whole soul eating thing? Why is it Amara's food of choice? Is it because the soul, as we've been told, it a very powerful force? The soul seems to help her grow, sustains her....but is that what helps her thrive? I mean, when she eats a soul from a human, what seems to be left is the darkness....humans are both good and evil, the trick is to balance it out....so if the soul is the goodness in us, and then there is the part of us that's the darkness, evil....if the darkness in us is stronger than the soul...does that account for serial killers, murderers, rapists, paedophiles and your basic scum of the earth? Does the soul in us allow for even the evil to be sorry and ask for forgiveness? If Amara feeds off souls, the part of humanity that holds goodness.....and all that's left within us is the darkness...is that what she actually thrives on? What's left behind?

Amara is apparently supposed to be amoral....but is Crowley changing that? Crowley is showing her films on Hitler and she's reading books on Hell. She may be amoral, but she is learning about true evil. In Crowley's effort to gain her favour is he making it worse not only for humanity, but also himself? Can Amara really be considered amoral....if her end game is to replace God?  Metatron tried to become the next God...he isn't seen as amoral...Metatron is corrupt and for lack of a better term....kind of evil....only he does it a sense of smarminess and humour....but he's a megalomaniac basically.....isn't that what we can consider Amara? Who's to say her world and what she thinks it should be would be any better? How many innocents would have to die to get what she desires Wasn't the same thing asked of Zach and his angels who wanted the Apocalypse?

I'm glad Cas is back to good...I think the Winchesters are going to need him. I love that Sam still holds onto his faith that God isn't far off....seems to me he's inclined to thinking that his vision, though he doesn't know what it meant, was in fact the sign he prayed for. It sounds as though he's also leaning towards it being a sign from God....me too....I hope we're right. :D I still can't buy into it being from the cage...but if it is someone other than God....I think it's someone good, someone on their side....and if that's the case, if it's not God himself, the possibilities are delicious.....Gabriel anyone? LOL

Those are my thinky thoughts for this week...

Hope they make you go HMMMMMM. Let me know if you agree or disagree, and if you have any theories!

Til next time.
-Anna