The Light on Spoilers, Heavy on Squee Preview of Supernatural 9.21 "King of the Damned" 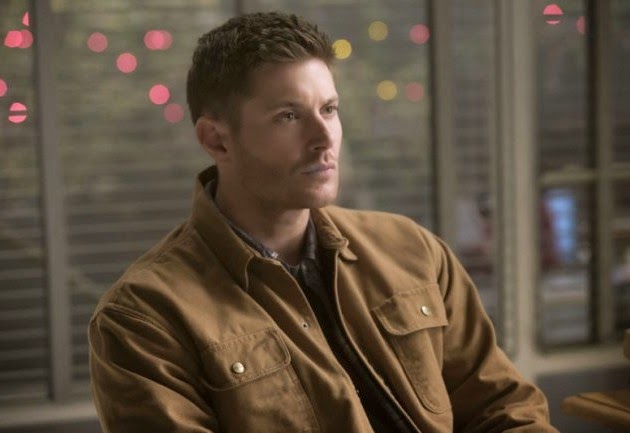 KING OF THE DAMNED

KING OF THE DAMNED

Sorry...but this title gives me fearful feels for some reason.

Hi and welcome to another squee filled preview! This one might be a bit more squeeful than usual because oh my gawd...ONLY 3 EPISODES LEFT UNTIL THE END OF THE SEASON!

Dean has the Mark of Cain and he's getting more and more gnarly as time goes on.  He also gets hotter. So I think we might be in trouble as he's going to get darker for sure...which means hotter...which means... KAPOWEEEE AMY!

Sam now has worry, you can see it in his swirly worry lines on his pretty forehead and also in the occasional, um Dean about that beheading the vampire thing, attempt to talk to his even-more-closed-off-than-usual brother. Gulp.

Crowley has the First Blade and some nefarious plan for Dean.

Abaddon is still an angry ginger.

Castiel is leading the rebellion against the Empire... wait, no it's against Metatron.

Gadreel is lurking like an angel who lurks with intent to do something we don't know what yet.

Metatron is trying to write the story of his life with him as an epic hero. But as Chuck once said, writing is hard!

Heaven is closed. The veil is chockers. Hell is, well even more hellish.

Dogs and cats, living together, mass hysteria. Okay that's not really a plot point of the season, maybe season 10.


So those are the things that are all about to intersect as these things do in Supernaturaland!

How about the synopsis for this episode....

PJ Pesce is new to Supernatural. He's directed a fair amount of TV, including Fringe and a few others...and notably to me, he directed Lost Boys 2! HA! I will seriously watch anything Lost Boys... Eugenie and Brad are well known to us. They have been markedly improved with their episodes in season 9, but I know a lot of fans see their names and get a little wobbly. "Blade Runners" was their last episode and that was bloody awesome! Just sayin'. 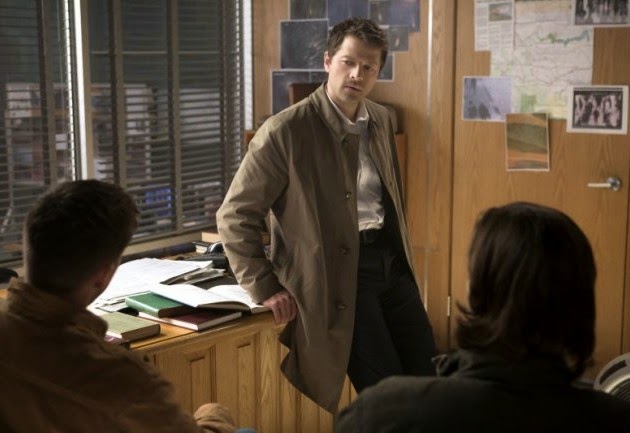 Okay, so the boys go and help Cas interrogate an angel. Oh, so we're torturing again? Just channelling 2009 Dean here! Oh hang on... there's this too. 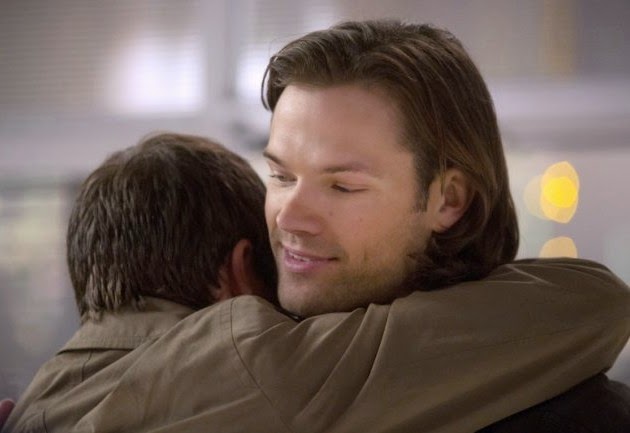 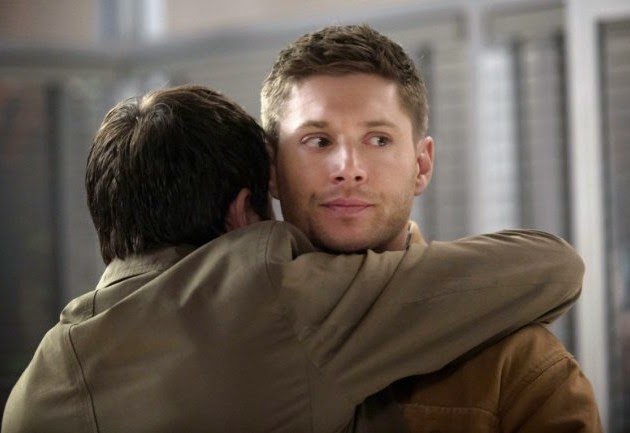 BAHAHAHA! Cas is obviously happy to see the Winchesters. Dean's face tho.

Okay where was I. Oh... lookit here, is that Gavin MacLeod? Ye olde son of Crowley? Is that Abaddon's bargaining tool? 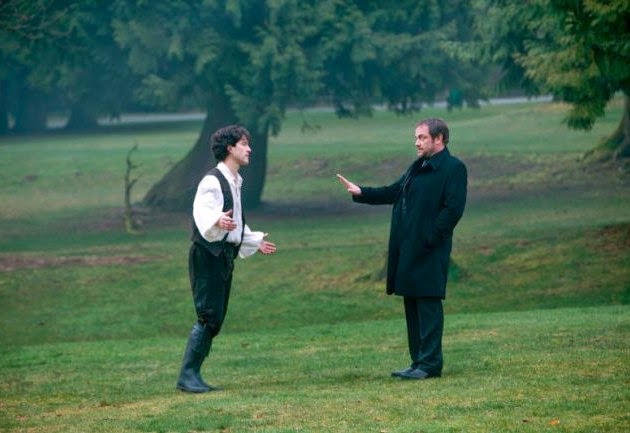 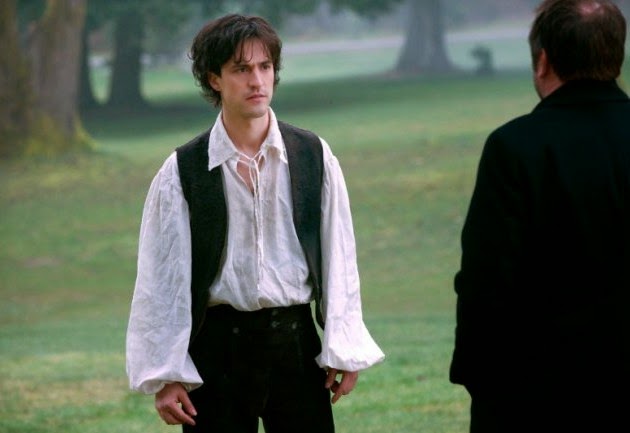 I don't know if the Angry Ginger's plan is going to be very successful! Though as a fan said to me, with Crowley's humanity in play, maybe he'll feel differently about seeing his son this time around (remember when Bobby summoned Gavin in "Weekend at Bobby's"). Though I think Crowley's humanity is well under control and is only in play when he needs it to manipulate Dean. Whatever happens, I'm sure Crowley will work this whole thing to his advantage.


Let's check out the promo from the CW.

That little flashy edit in and out of Dean's face as he's having Mark of Cain feels... unf quite frankly. That should make me feel all worried but it makes me feel rather differently! Still...objectifying and overshares aside, that does look terribly troubling. I'm so very frightened and yet excited for what's going to happen with Dean before the end of the season.

Who do you think the title relates to? *whimper*

Do you think Cas can talk Gadreel, the not the sharpest tool in the garrison angel around to betraying Metatron?

Who does Abaddon shoot? Looks like it might be whoever is in the chair in the buttoned down shirt and cardy. Who is that dead man/some other entity?

Is Crowley doing the old triple cross here? Playing Abaddon off against the Winchesters.

And here's a doozy... do you think Dean kills Abaddon in this episode and that sets off a chain reaction in him with the Mark of Cain that leads us nowhere good in the next two episodes? Because her name does not appear in the last two synopsis!

And...do you think Sam will be able to bring Dean back from the brink?


What do you think will happen to Dean if he does get to use the First Blade on the last Knight?  Will he become immortal like Cain, destined to live forever as those he loves and knows die around him? Wouldn't that be Dean's worst nightmare? Not being able to die, even when he wanted to because the one person he lived for was no longer alive. ARGH! FEELS. FEEEEEELS.


But who knows, right? I just watch this show and I don't attempt to ever figure out where the writers are going to take us.

There is no sneak peek yet. I DON'T KNOW WHY! But if one happens, you'll know where to find it. Same goes for the CHCH promo.

So what do you think? Are you excited or scared out of your wits?

Enjoy the episode...enjoy the show! And thank Chuck for season 10!

OKAY! Here we go with the sneak peek!

Wow. Castiel's hub of operations is rather impressive! The nerd angel has been busy. Probably easier when you're an angel to set up something like this I guess, but colour me impressed.

I love that the boys give Cas the blokey pat on the back hug, very different to the Winchester, hang on to your brother and never let go hug that the boys give each other. But hey, at least they now hug Cas back! Even Dean, who is less than effusive about, well anything except the opportunity to torture the information out of an angel. And on that, I must admit my hackles went up a bit along with how Dean's seemed to (until he embraced it), when Cas said he brought them on board essentially to do just that, torture information out of an angel. Geesh. For some reason that gave me a frowny face. I love how I can feel indignant for my boys! Ha! Though Cas does let them know they don't have to if they don't want to... but Dean's right, he called them in to be his heavies! Maybe he thinks they could get the information out of him psychologically. Um.Yeah. Dean's response tho. UGH. Flat, cold. UGGGGGH. So scary. (And hot). I'm so scared for Dean. So scared. And I hope Sam uses is outside voice soon to convey what's on his face. He be worried about his bro.

Hello CHCH promo...giving us what we need! See, now, if I was doing the promos for this show (I WISH), this is how I'd go. I think the Mark of Cain is the big hook at this stage and most of us are jonesing for more on it like Dean is jonesing for The Blade. This promo gave me thrills and chills, thrills because...IMPALA TALK. Oh my gosh, do the brothers actually have a bit of dialogue about how The Blade and The Mark are making Dean feel? Is Dean actually telling Sam stuffs? Not that he looks terribly troubled by the fact that once he touched That Blade he knew that he wouldn't be stopped. Also, any time Sam yells DEAN gives me lovely feels. I believe he's the only person who can get through to Dean in any significant way. Dean beating the snot out of someone. Fist all bloody. Sam yelling his name. Hair all epic. YES.

I must say, I am properly terrified about what's going to happen, especially reading Jensen's reaction to the season final when he read the script (as reported out of his meet and greet). I think this is going to be threat level red! I can't even prep my feels because I can't imagine where this is all heading. Well I can, but anything I concoct freaks me out so I push it out of my brains!

Anyhoo, on that rather dour note, this episode looks stuffed full of awesome! Enjoy!
-sweetondean