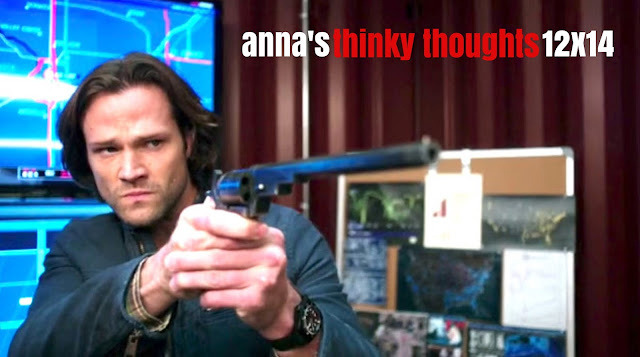 I really am loving Season 12.  I love the fact that halfway into the season I still have no idea what the hell is truly going on.  The mystery of the season has me intrigued and wanting more.  That's what a successful show does, it leaves you wanting more.

This episode was fun in that by the time it ended, I was so full of theories that I couldn't choose which one seemed the most likely.  Don't you just love that...when an episode just leaves you in a tailspin and you just can't decide what to believe might actually happen next.

I am so digging the myriad of possibilities right now and I'm just so excited to get to use the word...myriad.

I really loved everything about this episode.  From beginning to end, it was emotional, exciting, confusing, nostalgic, intriguing and so much more.  Everyone did a fantastic job.  I could go on and on with compliments, but I fear if I do that I'll lose my audience.  So I'm going to just praise the awesomeness that is Jared and Jensen.  They are constantly putting me in a state of wonder as to how they have not been bestowed an Emmy for their amazing performances in most every episode.

The guests were fantastic as well.  Wonderful performances by all.

Now that I've given credit where credit is due, how bout we get into the thick of things.   As I've already mentioned this episode was fun for me.  I couldn't come up with thoughts fast enough by the time the hour was up....and theories, I'm full of them. So much so that I've decided to share them all with you and hopefully get your take on what you think might actually be going on here.

Objective:  Seems to me the BMOL had one of the most powerful weapons in the world and couldn't use it.  I find it most curious that Sam Winchester was in the very location of that weapon, put in a situation where that weapon was required, and then provided the spell, on paper to make the ammunition for said weapon and handed it over to the very people who stole it in the first place.  It feels like both Sam and Dean have been played here, what I'm curious about is who's the leader of this game?  Mick seems to have been surprised at the attack on the base.  Ketch conveniently was a no show. He seems to have his own agenda.  Is it possible that Ketch arranged for all of this to happen in the first place?

What about Mick?  Well, Mick reminds me of S4 Cas.  I really think Mick believes that the BMOL are there in America to rid the world of monsters.  I also think that he believes that having the Winchesters on their side will recruit other hunters and make this goal all the more possible.  My belief is that Mick, Mary, Sam and Dean are being played and there's another agenda.   I really am leaning towards thinking that Ketch knows what that agenda is.  While it's understandable why Sam would see the BMOL the way Mary does at the moment, and while I also see Sam getting Dean to warm up to the idea, I think all three of them will eventually start to see the BMOL for what they really are....and I do think that there is something  really shady going on here.  I don't trust whoever these "old men" are and I don't trust Ketch.  Sooner or later the truth will come out.

THE SENSIBLE THEORY....FOR THE MOST PART

One might not have noticed because of the lashing out Dean did to Sam at the beginning, but one of the aspects I really enjoyed about this episode was how in sync they were with each other.

Dean working with Ketch, in my opinion, wasn't really about his need for scratching a kill itch nor do I find it plausible that Dean can be so easily persuaded to work with someone he doesn't trust because a free bottle of whiskey was involved. The way I look at it, Dean went with Ketch because, like it or not, Mary is working with the BMOL, whom he doesn't trust as far as he can throw, and angry or not, he was going to check this guy out for himself.

Sam did the same thing. Sam immediately responded to Mary's "urgent" text.  He did her the honour of sticking around, hearing her out and checking out the BMOL compound. Don't get me wrong, I do think that Sam was impressed with what he saw. The operation was efficient and run by a team of intellects. The weapons are advanced as is the technology they use to locate whatever monster they might be looking for.  They do research and don't attack merely one monster, rather they search for the collective. The geeky, research loving, smart and logical Sam Winchester would find this operation impressive.  On the surface this all seems like a well oiled machine. Truth be told though, the BMOL with all their gadgets and technology would all be dead right now if it weren't for Sam. They might have what it takes to locate and destroy the monsters, but when it came down to an attack on their own base, they were ill prepared.   They had no access to their weapons, they were infiltrated by a mole, and when push came to shove they didn't know what to do.  Sam is the one who came up with the strategy to kill the vamps.  Sam is the one who had the spell to make the bullets for the colt. Sam is the one who saved everyone left in that bunker.  He didn't use advanced technology to do it.  Sam used his knowledge and his skill that he acquired from being a hunter. When push comes to shove, the BMOL are glorified librarians who rely too much on their toys and not enough on the human factor.  I don't doubt that Sam came to the realisation that despite the BMOL's technology, his mother would be dead, they all would be dead if he hadn't been there.  So while I agree that Sam can see the positive aspect of working with the BMOL, envision a normal life for his brother and for himself, I think Sam's greatest motivation here is his lack of trust.   If mom is going to hunt with these guys then Sam will want to be there to protect her.  The boys have worked with those they don't trust before if it was for a good reason.  (Crowley and Rowena anyone?) Keeping Mom safe is a good enough reason for the boys.

I will say this though, I think the BMOL are going to learn pretty fast that despite the fact that the Winchesters( and I do think Sam will convince Dean) are willing to work with them, they will find out that the Winchesters do things their way. I also think that there is something shady going on with them. I have no doubt there will come a time very soon where the boys and the BMOL will start clashing on their methods of doing things.  It's going to be a short lived relationship and I believe very strongly that in the not so distant future it will be the Winchesters..all the Winchesters vs. BMOL or at least some of them.

I still keep thinking...big picture and I keep recalling both Chuck and Amara's words. Dean asked Chuck, after Chuck told Dean He and Amara were going to spend some family time together, what about us? Chuck responded that the world would be fine, that it had them. (Sam /Dean). With that Amara told Dean he would give him what he needed since he had done the same for Her. She in turn brings back Mom. Everyone was so focused on her lack of being a mom and how she was hurting her boys, I think we were blinded to what could be the bigger picture here. What Dean's gift truly was?.

That be all with the theories.....those are the ones I've got floating in my head.  Would so love to hear from you all...what are your theories?

The Alpha Vamp....need I say more.
Dean going off on his mom and telling her everything I've mentioned in previous posts.  Sam sticking by his brother while doing so.
Sam's never ending willingness to forgive.
Sam's badass hunting skills.
Sam's face when he realised Mary stole the Colt and never fessed up, nearly getting them all killed.
Sam's  killing the Alpha Vamp
Sam saving everyone
Dean respecting Mary's decision.
Sam looking at Dean when he told Mick he was in....still think that Sam yearns for the chance for Dean to have a normal life.