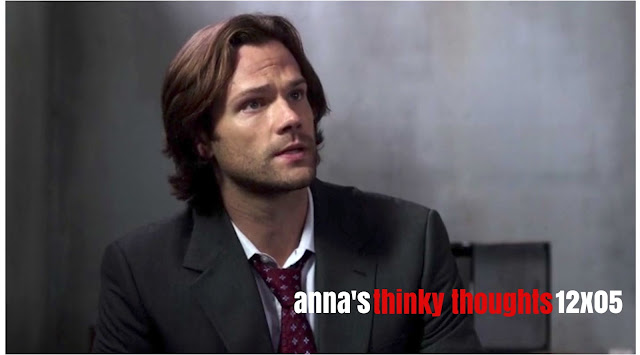 Hello everyone.  I hope you all enjoyed this week's romp with the boys.  I chose this word with great intention, because that was how I viewed the episode, as a light hearted, humorous, step away from issues, romp.

I wanted to share with you firstly my routine when writing up all my thinky thoughts. The first thing I do before writing up an article is read posts from others.   Sometimes I watch an episode and my head is just flooded with all these notions and I cannot write them down fast enough.  Then there are episodes where I have no idea what I should write about.  It's not that I didn't like an episode, it's just that I'm not always sure which direction I should come from.  When I read other people's opinions and get an idea of whether or not they liked an episode and their reasons why, it often helps me to establish my own, to consider a different approach or to sometimes agree or disagree with their way of thinking.  I then try to formulate a fair and unbiased article that explains in great detail what I'm thinking and my reasons for it.

I also wanted to let you know that when I watch an episode, I don't compare writers or show runners of the past with the present.  Every writer, every show runner has their own approach to the way the boys' story is told.  I cannot deny that there are some better writers than others, some get the boys more than others do, some have a better grasp as to how to tell a story that keeps you at the edge of your seat, or makes you laugh uncontrollably or ultimately has you reaching for the Kleenex.  There will also inevitably be episodes that might be considered, for lack of a more articulate word, klunkers.  Let's face it,  that's a given for every show.  There is undoubtedly, in a show that has gone on for 200+ episodes going to be some that don't go over well with some of the fandom.  As I was reading posts regarding this episode, there were quite a few that consider this episode one of those klunkers.  I am not one of them, but as I read their reasons for their disappointments, what it was that bothered them so much with this episode, it did enable me to gather my own thoughts as to why this episode didn't bother me at all.  I actually found myself giggling, a lot.

What  I believe to be a great disadvantage is the fact that many people compared this episode to Everybody Hates Hitler. It's understandable why they did of course, it is after all a story about the Thule and Hitler. They showed us in the" Then" scenes from EHH a reminder of who the boys are dealing with once again and how the Thule were/are this  twisted secret society hell bent on world domination and had sponsored the early days of the Nazi Party and Hitler. We are reminded once again that we are definitely dealing with a group of tyrants that were introduced to us back in S8. To be honest, I think that a reminder of who and what the Thule are  is all that these scenes from the past were meant to be seen as.  Here's the thing though, Ben Edlund wrote Everybody Hates Hitler and in this girl's humble opinion, Ben is a very unique writer.  He has an incredible talent for blending comedy with horror.  He has a sharp wit and there's an intelligence and wackiness in his scripts that scream out "this is an Edlund episode".   So comparing this episode with Everybody Hates Hitler is like comparing artichokes and chocolate.  The comparison is unfair because for the most part, chocolate wins out over artichokes.  In this scenario, EHH is most definitely the chocolate. It is my personal belief that if one watched the episode with the state of mind that it's just a lighthearted episode meant to poke fun at the tyrants of this world, it could, not saying it would, but it could change the more negative outlook one might have to a more positive one. Maybe one could possibly see the episode as it was meant to be instead of seeing it as  what it wasn't.  Again, just my humble opinion and nothing more.

All that being said, I liked this writer's first outing.  She certainly did her homework too.  I love that they brought up not only the Thule but hearkened back to Out with the Old and cursed objects that could be killing people.  I didn't for one minute feel like she was continuing where Ben E. left off.  It felt, for me,  like it's own episode with a more humorous take on the insanity that is tyranny. I didn't feel that the Thule were made out to be silly or unthreatening as compared to the Thule we first met. The way I look at it, crazy comes in all varieties.  It could be dark, scary insane like the Commandant we met in EHH, or it could be the kind of crazy where the men in the white coats need a call, which is what I thought about this Commandant. I couldn't help but be reminded of a Mel Brooks movie, when Hitler was resurrected in the Commandant.  No I didn't picture Hitler on Ice, but having Hitler be portrayed like a parody made me giggle to no end.  I love that the writer portrayed him as off his nut, because he was right? When all is said and done, no matter how light and humorous one tries to make of it, the truth of the matter is that no matter how you color it, crazy is dangerous and a tyrant is a tyrant, whether their name goes by Hitler, Thule or BMOL.  Bottom line here, what show is basically saying is the scariest monsters really are the human ones.  As goofy and even silly as this episode got, the message was clear and dark, the biggest threat facing our boys isn't a supernatural monster, it's a human one.

I am now going to sing the praises of our boys and the guest cast.  They all did a great job.  They made me laugh and I really wanted to laugh.  I love Sam as you all know.  He's just a wonderful soul.  Show has always depicted Dean as looking out for his younger brother, but sometimes I think it goes unnoticed how much Sam looks out for Dean. I love that in this episode, and the last few eps for that matter, we see a lot of Sam's concern for his brother and him reaching out to him, despite getting shot down.  It tickled me to no end that Sam offered Dean pie to cheer him up.  My heart melted when Sam noticed, by Dean's refusal of food and pie, that Dean still wasn't as alright as he claimed and Sam wanted to be there for Dean to open up to. Nobody will ever know Dean the way Sam does.  I also love how Sam is connecting with the victims as well, being that sympathetic ear and offering them comfort and understanding.  I thought it was hysterical that Sam c-blocked Dean's use of the grenade launcher because he thought stealth would work better....oh Dean, don't worry, Sammy gave you a raincheck...you will get to use that thing one day.

The fight scene between the boys and the Thule henchmen was awesome.  I really like the lighter part of Dean which we did eventually get to see in this ep, from his clumsiness in the antique shop, to his readiness to shoot the Commandant's son in the back of the head, his finally getting to say "follow that car", the excitement of using the grenade launcher to his glee of getting to kill Hitler and boast about it.  Dean has been pretty serious of late, so this was a nice change of pace.  I was really glad to hear him say that he earned that pie.  Baby steps Dean...we're getting there.

I found Ellie to be very likable and I totally felt for the poor girl, but seriously folks, when you have the opportunity to be in the same room as Sam and Dean Winchester, you never ever leave.   Family issues can be tough, just ask the Winchesters.  Though I kind of felt worse for the Commandant's son.  Poor guy, you can't choose your family and all he ever wanted was to make his dad proud.  Sound familiar?  I guess when your dad tries to off you it's time to reconsider your alliances...smart move allying with the Winchesters here.  I wonder if Ketch is still tailing the boys...and if so I wonder if perhaps Buffalo might not be far enough.  I liked the different approach that the writer took towards the Commandant/Hitler.  The Commandant was certifiable to say the least.  There was a blatant cruelty and he had no qualms about killing is own son.  The turn when Hitler was resurrected was humorous but it did have dark undertones.  Hitler was definitely portrayed as being off kilter but at the same time you can sense his underlying cruelty.  We all know that tyranny is no laughing matter when it comes to reality.  This is Supernatural folks and I really got a kick of how show poked fun at this maniacal tyrant by illustrating what a pie eyed crazy son of a bitch he truly was. He most definitely earned dying twice.

That's all I got for this week.  Next week looks amazing.  Mary, Billie, Jody....good stuff indeed.

Til then....enjoy the week folks.