The Light on Spoilers, Heavy on the Heart Preview of Supernatural 10.22 "The Prisoner" 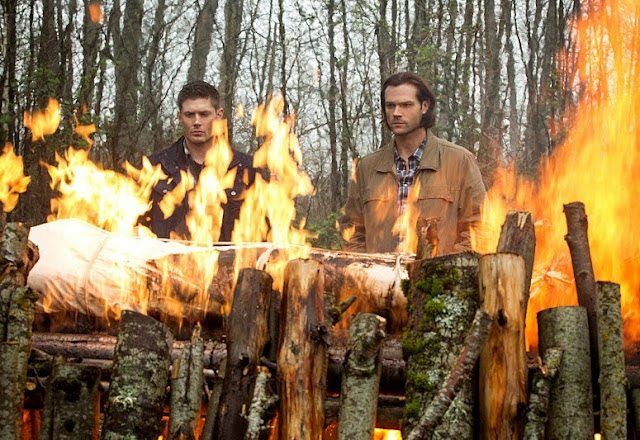 Oh man. 2 episodes left in the season and I have a bad feeling about this, Chewie! A very bad feeling. Very, very, very bad. Very. Bad.

So let's just get into it and face the heartbreak head on.

Anyhoo...now I've made myself all sad! So let's look at the synopsis for the penultimate (who says penultimate) episode of season 10 - "The Prisoner".


DEAN IS ON A RAMPAGE — When it comes to the Stynes, Dean decides to take matters into his own hands. Sam tries to come to terms with his decision. Thomas J. Wright directed this episode written by Andrew Dabb.

Shortest synopsis ever, which is incredibly troubling. The less they say in these things, the worse the outcome of the episode usually is.

I think most of you know I'm a promo producer - so making these things is what I do for a living. I tend to look a promos as a viewer, but also as a producer. This one, I looked at very much as a producer! There's a bit of slight of hand editing going on here which is pretty nifty. For example, the cut between Dean kicking out and the bunker door blowing in. Pretty sure those are two totally different scenes! Also, I'd bet my bottom dollar (whatever that is), that Dean is aiming his shiny silver gun at those people who end up dead on the bunker floor - not at Cas as the cut suggests. Of course I could be wrong...

Is that the Stynes scattered over the bunker searching for the Book of the Damned?

Now, I do think Crowley is in a spot of bother and I think that's probably going to be Sam making good on his promise to Rowena. Will Sam actually kill him?! To be honest, I wouldn't put anything past this show.

Dean sure has the upper hand. Super strength and immortality. The Stynes are in trouble and I'm so very happy about that. Kill them all I say. Or certainly at the very least, Eldon.

But I don't want Dean to lose control and I don't want him to give into the Mark. I don't. I really don't so damn much.

Oh and I'm pretty sure Cas punches Dean in the face - I pulled this promo apart frame by frame. It's a quick cut (only 10 frames) but here are a couple of those frames - that looks like Dean to me. 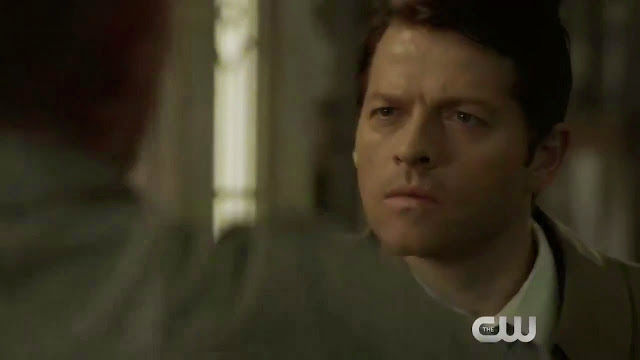 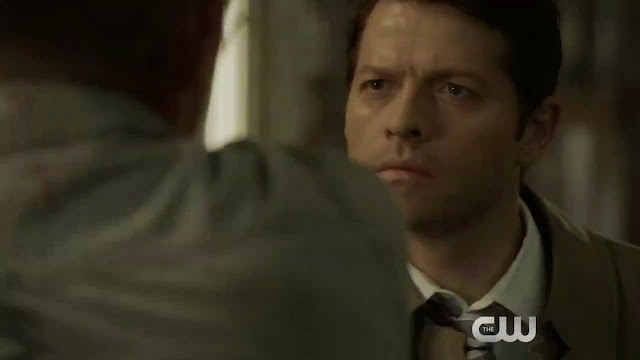 And I think this is Sammy 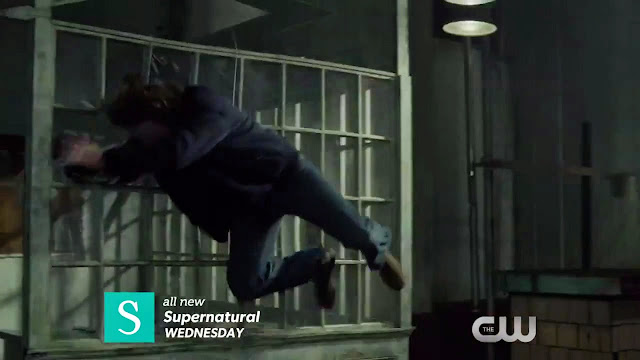 And I'll never get over these faces.... 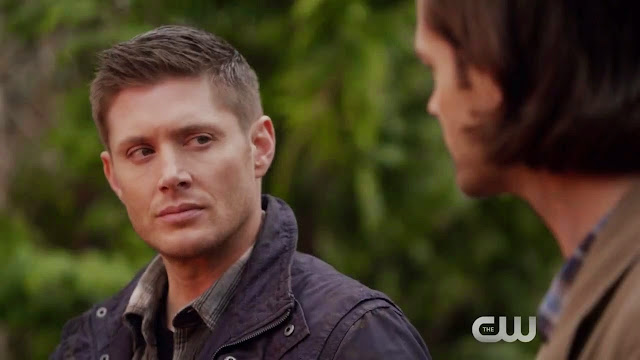 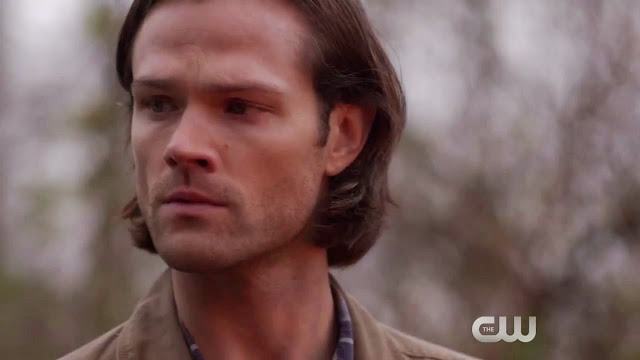 Ack. It's going to hurt so much! The funeral of Charlie is going to destroy us all.

Let's look at the sneak peek.

Dean may have asked Sam to shut it down - but I doubt very much that's going to happen. Sam will find Charlie's email, he'll find that she cracked the code and it'll all go from there. There's no way that Sam will let that work Charlie did and sacrifice Charlie made for Dean go to waste.

Okay...if you haven't watched Carver's preview yet, hold on to your guts, because you're about to feel like someone just punched you in them, and you may not be able to breathe for a bit...

Of all the angry things the brothers have ever said to each other, I think this one hurt the most!

Of course we know that Dean is not just angry, but in pain - and we saw how Sam lashed out at Dean when he was angry and in pain last season. These two know what hurts the other the most and aren't afraid to go there. We also have to remember, and this is important, Dean currently has all the rage and ferocity of the Mark of Cain pumping through his veins. He's been holding it a bay for such a long time - not any more. The Mark of Cain has the wheel and Dean Winchester is on the verge of being lost.

Regardless. That was just damn heartbreaking and I can't stand the pain of those words or the look on Sam's face.

I know that Dean would not rather it were Sam up there, I know that and I don't doubt that for a single second. Dean would never, ever wish his brother dead. But right now, he's blinded by hurt, anger, hatred towards the Stynes and a rage that is about to consume him driven by the Mark of Cain. And yeah, he's as angry as hell at Sam for what he sees as bringing Charlie further into Dean's mess. Charlie died trying to help Dean, and inevitably he'll end up putting some blame on himself, just like Sam will be blaming himself now - never mind who did the actual killing - this is the Winchester way. But regardless of what is driving Dean right now... Sam will be cut to the quick by those words, even if logically he puts some, or all of it down to the rage of the Mark of Cain eating Dean away. Sam'll already be feeling like shit and now...

And will Sam kill Crowley? Dean going off on a merciless, Mark of Cain rage will fortify Sam's need to cure his brother even more. It's going to make Sam even more focused on saving Dean. He'll do anything. He's come this far, nothing will stop him now. 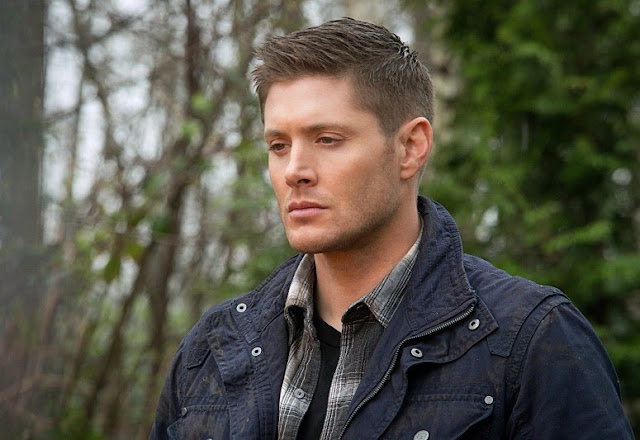 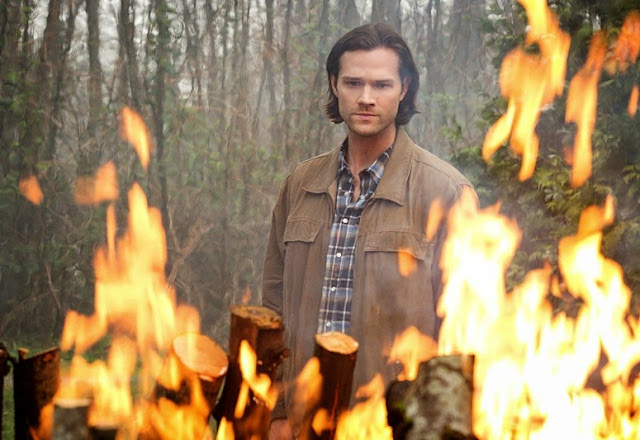 How can a damn TV show hurt so much? I have hardly stopped thinking about Dean's words since I saw that clip this morning, when I gasped and covered my mouth with my hands. Just completely and utterly shocked.

Wow. I can't wait for this episode - horrible pain and all. I'm excited for the end of this epic season, because I'm baffled by what's going to happen.

I just want the brothers to be able to get through this and start to heal... Oh heys look, there's that optimism of mine! HAHAHAHA! Nup.