The Light on Spoilers, Heavy on Squee Preview of Supernatural 10x21 "Dark Dynasty" 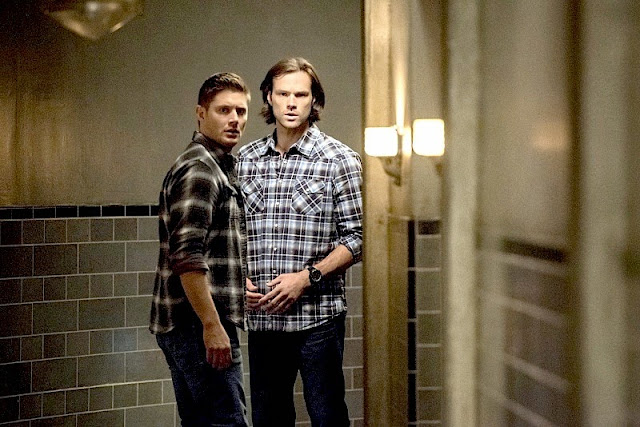 GUYS! I'M GETTING REAL NERVOUS! We have 3 episodes left in the season and I don't know what's going to happen! Which is the way it's supposed to be. The only prediction I have is that it's going to give me feels and I probably won't like it! I'm serious though, my tummy started to hurt when I began to write this. I don't think I can handle anything like last season ever again, and Jensen and Jared seem to think it's worse! Or more intense. Which sounds worse! I'm nervous! 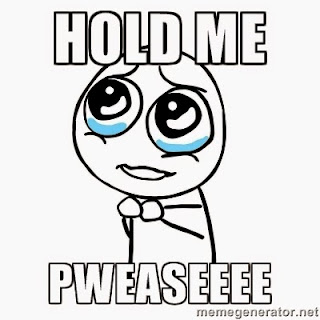 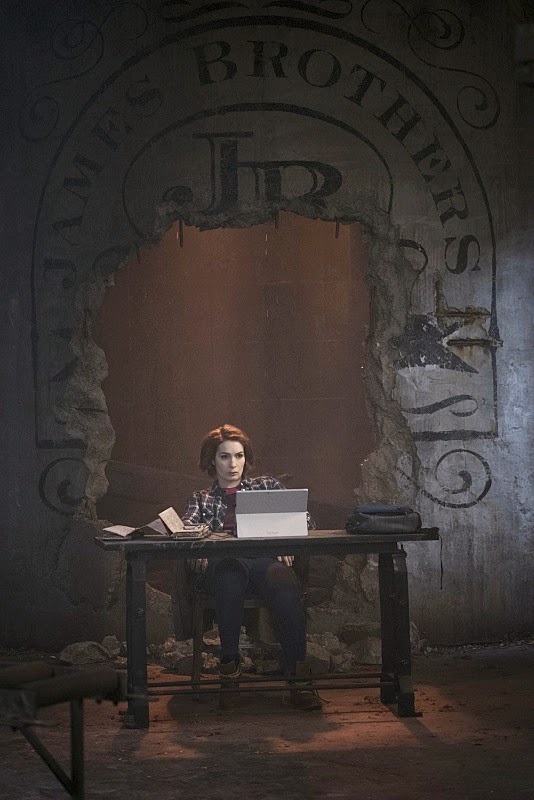 THE WINCHESTERS MEET THE STYNES — Dean (Jensen Ackles) and Sam (Jared Padalecki) investigate a bizarre murder and realize the killer bears the same tattoo as those from the Styne family. Eldon Styne (guest star David Hoflin) attacks Dean and a brutal fight ensues. Meanwhile, Castiel (Misha Collins) acts as referee when Charlie (guest star Felicia Day) and Rowena (guest star Ruth Connell) are forced to work together on the Book of the Damned. Crowley (Mark Sheppard) discovers his mother is missing and knows she’s up to something so he turns to an old enemy for help. Robert Singer directed this episode written by Eugenie Ross-Leming & Brad Buckner (#1021). Original airdate 5/6/2015.

Ooooo Bob Singer directed this one! Neat! Eugenie and Brad last wrote, "Paint it Black". This is their fourth episode this season! That's a big slate! They always have ALL the characters in their episodes, with a few different arcs going - but at this end of the season, we know all the arcs are intersecting. With the Cas/Claire storyline now wrapped up, we can focus totally on the Mark of Freakin' Cain (its full name), but we still have the Crowley/Rowena threads to tie, and it looks like this might take place, or at least begin to, in this episode. Who do you think the old enemy is?

Oh and did I mention I'm pretty happy we get to see Charlie again! DON'T KILL HER, SHOW!

Let's check out the promos, we got a short one and then an extended version...

OMG. That line of Rowena's is the best! So funny. What's not funny is Dean's face when he's trying to remain composed and it's just sunk in that Sam's been lying and he didn't destroy the book. GAH!

What's the deal with these Stynes? How come they seem super human. I feel like that's one of them jumping out of the window.

Also, Sam is so busted. SO BUSTED. That's Sam's I'm so busted face when he runs into Dean in the bunker. Like his so busted face in the car last week. This time I think Dean's going to take a bit of a different tack. HE IS SOOOOO BUSTED.

Charlie is smiling at the end there - just before someone bursts in on her - someone Styneish I assume. Does that mean she was on to an answer? Are they going to take the book just as it's about to be cracked, leaving no hope? That's what I think is going to happen. That's what I think is going to push Dean to make some kind of drastic decision regarding the Mark of Cain. Eeeeeeep! But, oh please show, don't do anything to Charlie, that would be too much. Too much for everyone. Dean would be destroyed. Sam would be destroyed and riddled with guilt. And I can't see Dean ever forgiving Sam for bringing her into this mess if something fatal does indeed happen to her. So no, don't do that show, because that would be just the worst. Just. Don't.

Oh and one more thing... WET WINCHESTERS! This is the second time this season we've seen the boys out in the rain, dripping wet! I likes it!

The Death Star! Bless Charlie. And I love how she dresses like a hunter these days. Plaid and khaki! (Don't do anything bad to Charlie, show!)

I love how Sam has to turn around when he admits to not burning the book. He can't face Charlie. He can't look at her when he tells her about Rowena either. He has to look away. He so knows everything he is doing is wrong-town, regardless of the reason he's doing it, and I support the reason wholeheartedly.

I also think he's become a little obsessed/one-eyed about the whole thing, because it's not that Dean's given up at all, it's that he sees no way out that isn't going to hurt the ones he loves or possibly the entire planet, and so he's fighting it on a personal level, knowing he'll eventually lose, but choosing to face that loss on his own terms, fists flying in defiance and without taking anyone down with him. I think that's a long way off giving up, or even giving in.

But Sam can only see one thing right now, saving Dean, above everything else, including the well being of anyone who might be able to help. Because that book is bad news bears, and doing a deal with Rowena, regardless of the desired outcome, is never going to turn out well. But asking Charlie to work with this evil witch? Yep, not good. Not good at all! Probably a really bad decision. Definitely a really bad decision!

Don't get me wrong here, I love that Sam is willing to do anything, try anything to help save his brother. One, because I love their love - dysfunctional as it may be, I love and adore their love, and I love that Sam will do whatever it takes for Dean. That he knows he just can't let him go, he can't lose him, he can't live with out him. Oh boy, I love all that with a fiery passion. The other reason I love it is because it's exactly how Dean would react in the face of losing Sam. In fact it is how he reacted, and the mirroring of the brother's paths in season 9 and 10 has been so great. I've loved it.

I have one question though... If Rowena is chained up all the time...how does he go to the loo? Or maybe she can sort that out with witchcraft. Enquiring minds need to know! It's important stuffs! 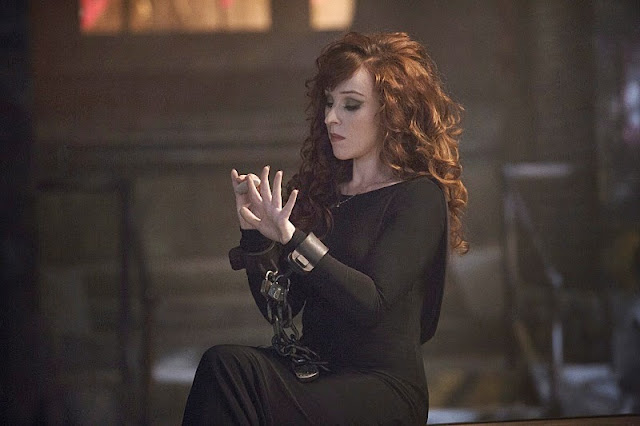 Okie, dokie, what has the Carver got to say?

I do not like Rowena's last line ONE LITTLE BIT. Not a bit. Do not let that be foreshadowing. Nope. Nope. Dean's getting worse, Sam's getting more desperate, Rowena's getting more devious, Charlie love the Winchesters like brothers. She's in deep SHIT!

So how are you all feeling? What are your thoughts? Mine are screaming in fear...in the best possible Supernatural way. Remind me why I love this show again, seeing as it gives me PAIN, PAIN AND MORE PAIN? Oh yes, because it's AWESOME!

Sound off in the comments! Enjoy the epi! Here's some boys to take the edge off!
-sweetondean 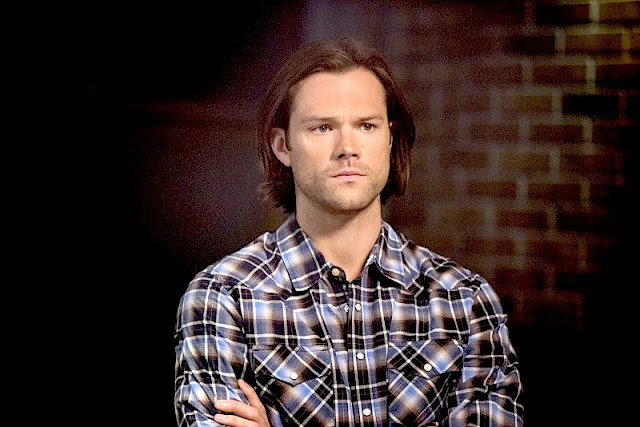 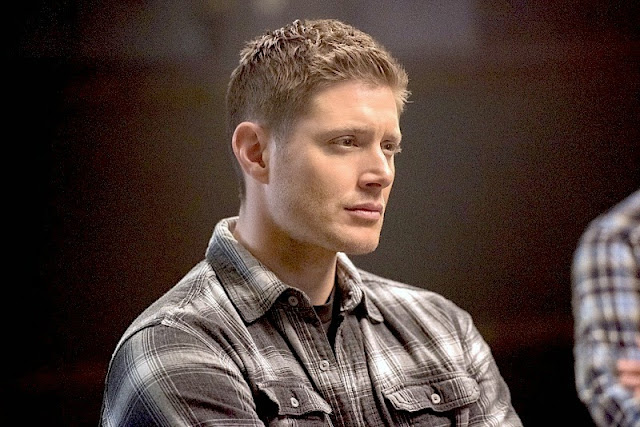 P.S. I'm sorry I haven't got to the "Angel Heart" review yet. I got distracted by my muddy boys post and also, I'm writing a book I hadn't touched in about a year and I suddenly got all inspired! So that's been taking up my time. But I promise I will get to the review!
-sweetondean (again)