The Light on Spoilers, Heavy on Squee Preview of Supernatural 10x06 "Ask Jeeves"

THERE WAS SINGING
AND SAM AND DEAN WERE ALL JOKING AND POKING FUN AT EACH OTHER
AND DEAN HUNG THE FAKE SAMULET ON BABY'S REAR-VIEW MIRROR
AND MORE THAN A SINGLE FANGIRL TEAR WAS CRIED AND CRIED AND CRIED!
*sigh*

Can we keep talking about THEN?

Sam and Dean are going to play Cluedo!  (Or Clue for my American friends!)

Let's have a look at the synopsis!

DEAN GETS A SURPRISING MESSAGE FROM BOBBY’S CELL PHONE — Dean is surprised when he checks Bobby’s cell phone and hears a message that says Bobby or his next of kin have been named as a beneficiary in an heiress’ will. Hoping that means extra money, Dean talks Sam into hitting the road to claim their fortune. However, what they encounter at the house is far from a treasure chest. John MacCarthy directed this episode written by Eric Charmelo & Nicole Snyder (1006).

John MacCarthy is Johnny Mac, one of the show's first assistant director. He works on the even numbered episodes. He has also previous directed, "The Girl With The Dungeon and Dragon Tattoo" and "Rock and a Hard Place".

You know what else I love, the references to all the people in the boys lives that the show always remains true to. So many other shows, when someone dies, it's like they cease to exist. But whether it's John or Bobby or someone else, if they've been important to the boys, an important part of their lives, they stay in their lives, even though they're no longer there. I love, for instance, that they still talk about their dad. Because they would. And it's nice to see that recognised.

But here we have a Bobby reference, and it makes my heart happy. And maybe we might find out even more about Bobby's mysterious past! That always seems to be fun!

Let's check out the promo!

See! It's Cluedo! It was Colonel Mustard with the candlestick in the conservatory!

Have they done a murder mystery style episode before? I don't think they have. I can't deny it looks like fun. And I also can't deny that I'm enjoying just hanging out with the Winchester brothers for a bit. It's like, as they find each other again, I'm finding them again too. Not that I ever lost them, but you know what I mean. It's like rediscovering that gorgeous thing that these two have between them, at the same time as they do. I love it! And Dean's reaction at the end there? Just bless his horny heart. I love how he isn't ageist!

I really love this clip and I don't even know why! Okay, maybe I do. Dean still tinkering with Baby. Sam bringing him coffee - a foofoo one at that. Dean knowing way to much about Tori Spelling (I love that Bobby watched that show)! Even the music is all sunshine and puppies! I played this clip about 3 times in a row, grinning just from the shear peacefulness of it! Like, how often do you watch a sneak peek and don't feel a bit freaked out. And Dean is wearing a gorgeous shirt! He's been shopping again. 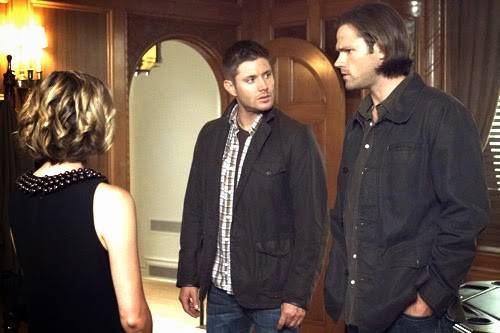 Of course, I know this Winchester brotherly love fest can't last. We're only a few episodes away from the mid-season hellatus (booooo!), and the shit has to hit the proverbial soon. And we need to see what Cas and Crowley have been up to while Sam and Dean have been re-epicing their epic bond. And that nasty tattoo on Dean's arm has got to start rearing its ugly head, and Carver has said that will test the brother's reforged relationship. Then there's that Rowena chick out there about to do who knows what.

But until then...I'm going to enjoy watching these two take this road trip, happy to be sitting next to each other again...the two of them, alone, but together…against the world.

I'll just be over here...lulled into a false sense of security.