A Wild Moose Sighting! Saying Goodbye to Vancouver with a Jared hug. 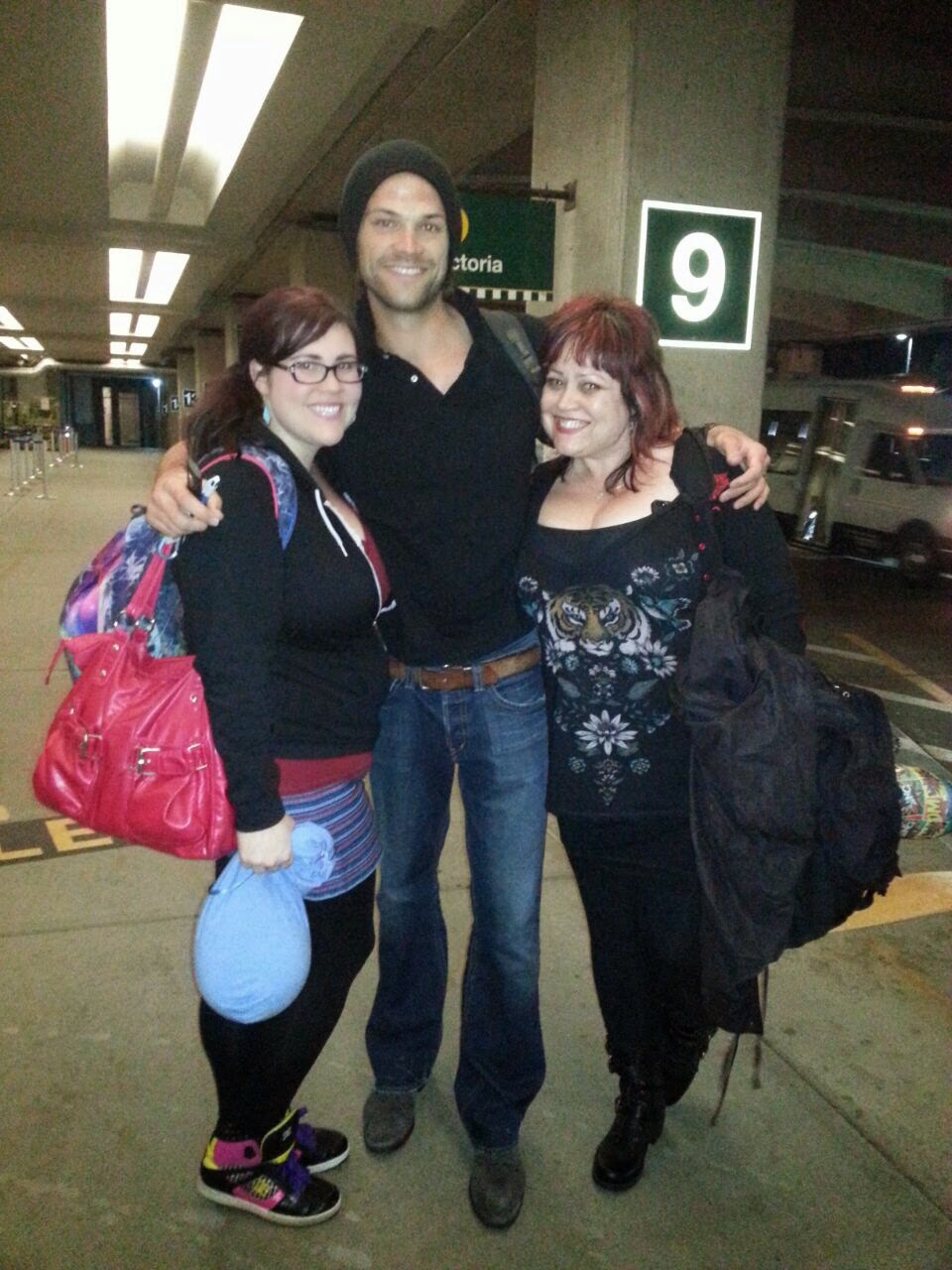 You just wouldn't read about it. Talk about lucky! The first time Hazel and I went to Vancon, we rounded out the trip by watching shooting the night we flew out. This time around, to top off another awesome Vancon trip, Hazel and I rounded out our trip by seeing Jared at the airport!

So this is what happened.

We got to the airport a bit earlier than we needed to, because we'd run out of things to do...and money! We weren't boarding our flight until 11pm, so once we were all checked in, to kill time, we thought we'd sit in arrivals...for reasons.

We knew the boys would be coming back into town that night. We knew Jared was on already on his way from Texas. We'd seen his tweets. We thought he might have gone Austin/Dallas/YVR. We assumed Jensen would fly direct from LA. We saw a couple of flights on the board we thought may be their flights...maybe...so we sat and waited to see what happened, enjoying the free wifi and watching people meeting their loved ones. We had nothing better to do anyway.

I spied a guy I thought was one of the autograph hounds. He had a bag of stuff and a clipboard But we weren't sure. So we kept our eye on him.

The LA flight we'd been eyeing off came in first, though there were several that night. Suddenly we saw the possible autograph guy charge off outside, but we didn't see whomever he saw. I went looking for the guy, but he was back before I could even see where he went! If it was Jensen, we missed him. We shrugged it off. To be honest, and this sounds weird, we were sort of relieved! We were a bit freaked out about seeing Jensen and feeling all stalkery!

Anyhoo....we sat back and relaxed again.

A while later the Dallas flight landed. We suddenly saw the girl who was with the autograph guy run outside, clip board in hand. I didn't see anyone, but Hazel thought she may have seen Jared in the distance. Tall guy, black beanie. I said I'd go investigate!

I walked outside and saw the girl up the path aways, near another door. It was like a back way out. I walked up to where she was and pretended to be looking for something else, while I was trying to see what she had out for signing, and then just like that...OUT WALKED JARED!!!

He went straight to the autograph girl said hi and signed. As he was signing, he looked up and saw me awkwardly standing nearby and looked helluva surprised! I waved and said, "Hi Jared".

He finished signing, came over to me and highfived me, then linking his fingers in mine and holding my hand goes "HEY GIRLFRIEND!!"

I explained I was at the airport because I was flying home in a bit (not just stalking him). He said "No way, you're only just heading home now?" (it was a week after the convention), I said "Yep" he said "Do you want my water?" and handed me a bottle of water! Looking a bit startled, I said "Um, sure, Thanks!" he said "You've got a long flight ahead, you're going to need water!" I said "I do and thanks!" I then said to him that Hazel was inside and he nodded, or he may have said something, I can't remember and then the autograph girl asked him about his arm and Jared pulled up his sleeve to show how skinny his injured arm was! Then Jared asked her about her dog (which was super cute and came out later with the autograph guy. Jared and I patted it). At this stage as he was chatting, I pulled my phone out of my bra (!!) and fumbly texted Hazel, HE'S HERE!!!!! I didn't know what else to do. I was just hoping she'd get it and bee line out!

Jared turned to me and said he had to go as he had a 6.30am call. Just then I saw Hazel coming! I said "Oh here's Hazel!" Hazel waved from a distance. Jared saw her and turned to the autograph girl and said, "Can you take a photo with me and these guys?" Bless him! We didn't even need to ask! I probably wouldn't have even asked to be honest. But Jared, he just organised it!

He went to take my phone from me to pass to the girl and I said it was broken, and he was all "It's broken?" and I said "The camera doesn't focus anymore!" and he's said "I fucking hate iPhones!!"

I called out for Hazel to get her phone and she said she had it in her hand and Jared yelled out for her hurry, but all jokingly! Hazel got to us and and Jared said hi and then just pulled us both into him. The autograph girl took Hazel's phone and took a couple of photos! Some other dude took a photo of us too! Lord knows why, but okay.

Jared kind of kept hanging on to us, like, tight (his back was nice and sweaty too)! Then he said he had to go, he had his car keys in his hand. But before he left he said something about iPhones again and then told us the AT&T story. He went into great detail (which I'm not going to share as he told us stuff that might be personal). In the end he had to stop himself as he was telling it because he was getting all riled up again! He's a fiery one! Then he said sorry, he had to go because of his early call. We thanked him for stopping to chat and Hazel said we'd see him Vegas. Jared said "In Vegas!" and blew us kisses!!!!! Then he told us to have a safe flight, to have some whiskey to help us sleep, lots of whiskey, and then he left! AND WE WALKED OFF ON CLOUD NINE!!

When I got off the plane in Sydney, I saw a photo of Jensen at YVR, basically standing exactly where we'd been sitting!!! He was with the other dude who took our photo. He came in after we left, but we couldn't wait for the next flight he may have been on because it was about 40 minutes after Jared's flight and we had to go through security for our flight. So we wouldn't have seen Jensen anyway.

That was our wild Moose sighting! 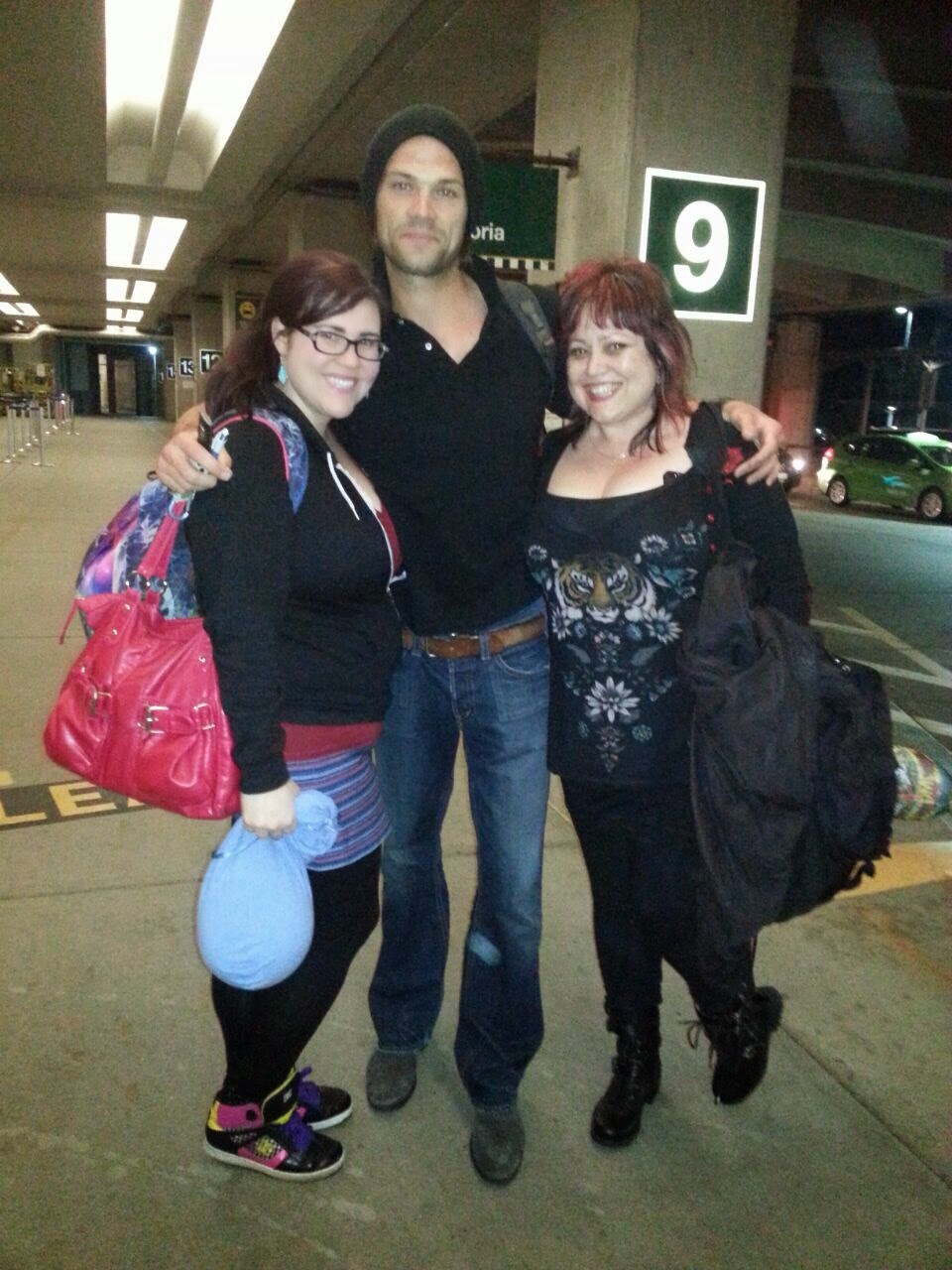 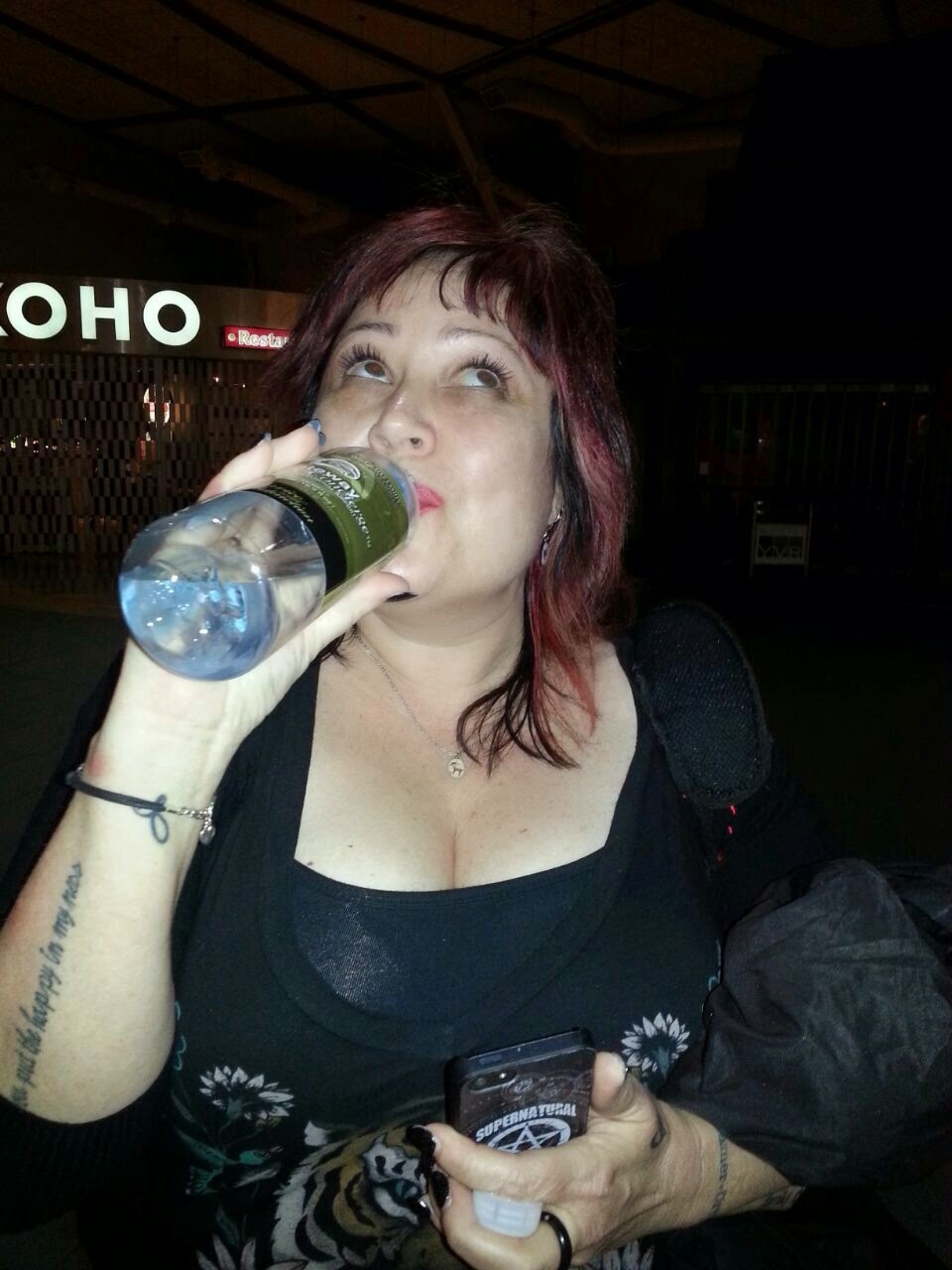 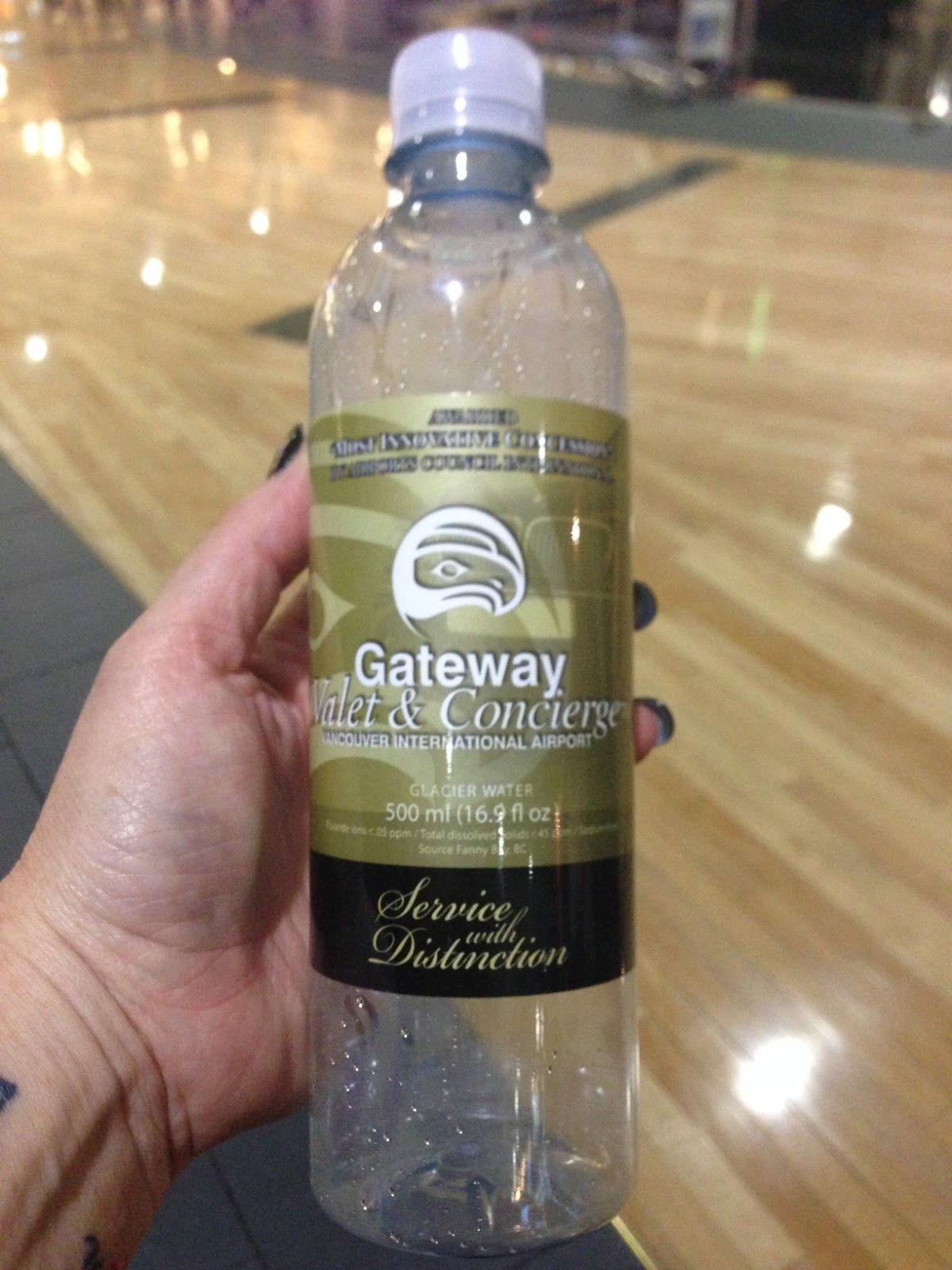 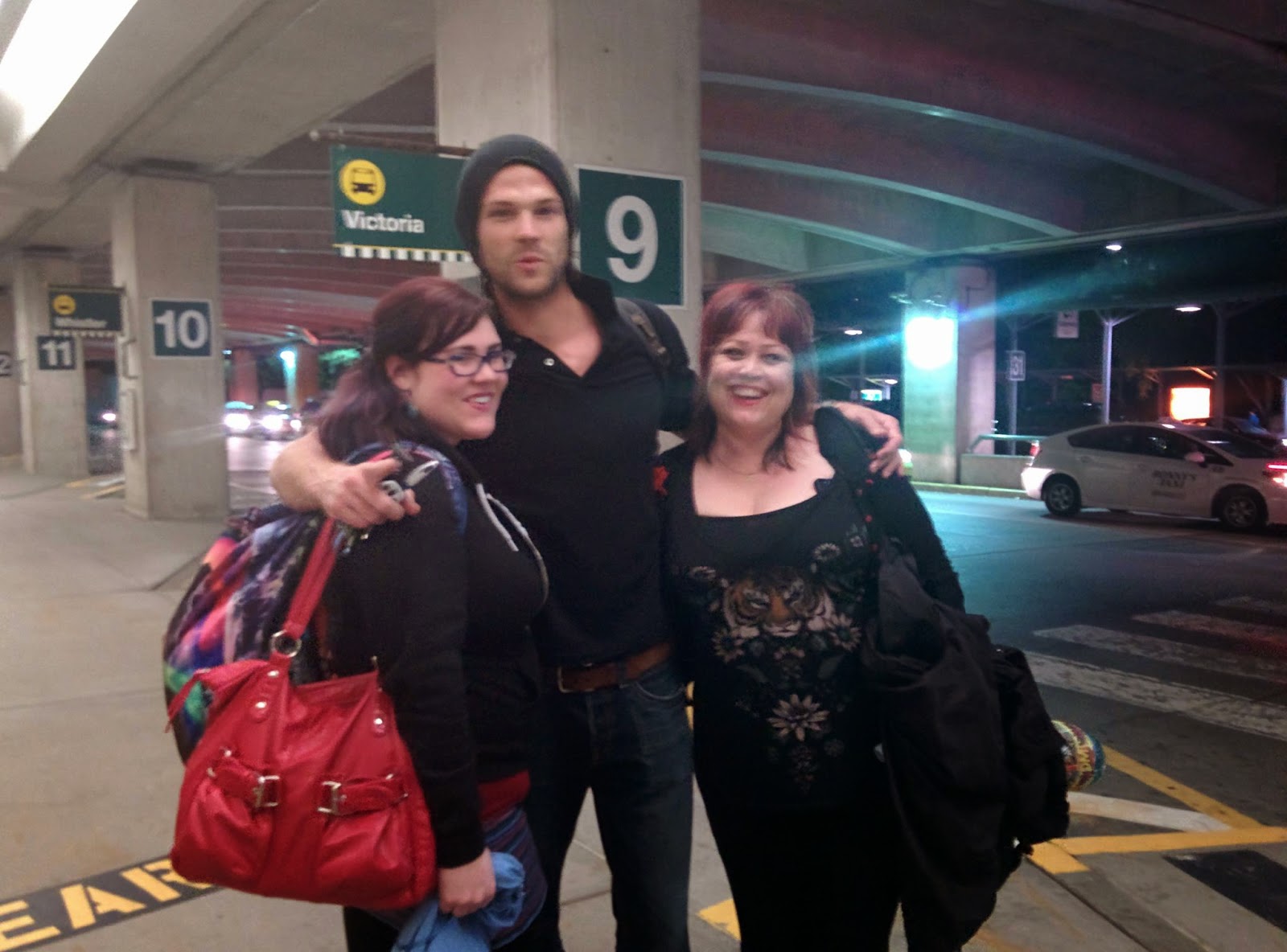