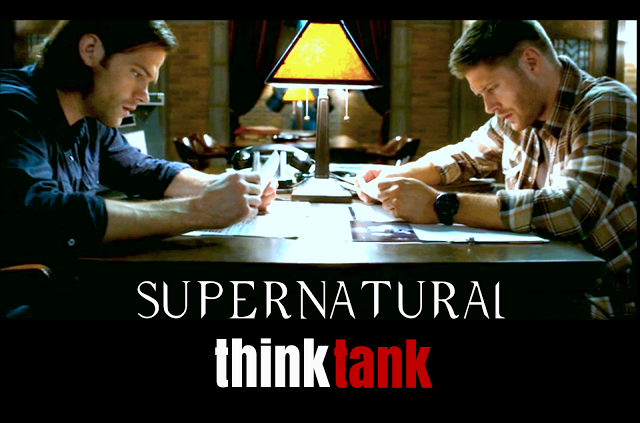 I never really liked the term "filler", especially it's application regarding Supernatural. The term is often associated with MOTW eps, which has always boggled my mind. I never really use that word when describing any episode, after all how can any episode that revolves around Sam and Dean Winchester be considered filler? It's their life, it's what they do, it's saving people and hunting things, the family business and it's the MOTW episodes, the stand alones that tell their story best. Those are my favourites, those are the meat and potatoes of Supernatural. Those are the eps that revolve around our boys and what I deem to be the bigger picture, which is fighting for humanity, one life at a time. It's the MOTW episodes and the stand alone eps that truly represent our heroes best.

While I don't like the term and never use it myself, the word "filler" does exist and a lot of people use it to describe non myth arc episodes. I'm the opposite in fact. If I had to use the term "filler", I would use it on myth arc eps. I find myth arc eps, especially those of late to fill one purpose, and no, it's not to move the story along. I consider these myth arc eps, or "filler" eps if I was forced to use the term, to be what they are, focus on the smaller picture story so that Jared and Jensen can get their much earned and desired days off. It's these eps that have very little of our boys and bring all the other characters into play. These are also the eps that give one the illusion that the real story of the boys is them once again having to destroy the big evil and save the world, but in reality, that's not nor has it ever been what this show is truly about. The big picture is the boys being the heroes they are by focusing their attention on the innocents in a more personal way. It's about saving people yes, but doing it in a way that focus' on the individual, giving importance to human life by letting us the viewer witness the victim in a personal way so that we're invested in it emotionally. When Sam and Dean Winchester save someone against a monster, animal, human or otherwise, they are all the more heroes in our eyes because of the connection we have to the victims and their plight. This is what I've always considered to be what show is all about. The myth arc stuff, for me that's the filler eps. I'm not saying I don't enjoy these eps, because I do for the most part. Yet, it's these eps, the ones that lack the Winchesters, that I find myself less invested in. It's much easier to go to the bathroom during the ep, then waiting for the commercial. I find myself getting up more, doing errands that most definitely could wait. While eps like the one we had on last night keep me interested, I'm not as emotionally invested and find it a lot easier to get distracted.

I want to go on record saying that I liked Hell's Angel, I just wasn't emotionally invested in it as I have been for the last couple of weeks. The biggest thrill for me was seeing Rowena alive and kicking. I knew we hadn't seen the last of her. I'll tell you this much, Amara and Luci might seem like today's problem, but in my opinion, it's Rowena that's going to be the real problem. I hope the boys get rid of Amara soon. She's not all that interesting to me. She's basically, much like Lucifer, a disgruntled member of God's family who's throwing a temper tantrum, and sees fit to destroy humanity as simply an act of spite and revenge because she never got her way. She bores me. She's not scary or smart and she's dressed in a way that certainly doesn't represent what is supposed to be an all powerful deity. The more we see of Amara, the more I miss Dick Roman. I will be happy when the boys finally figure out how to be rid of her.

Crowley is always a delight. We pretty much knew that the best move for him is to go to the boys. I think Crowley proved useful in this episode. We've pretty much learnt two things due to Crowley. Firstly, it's obvious that a HOG isn't capable of destroying either Luci or Amara. It could come into play as some sort of distraction, but it's not going to solve the problem. I think we're getting closer to the boys realising that Amara and Luci cannot be killed. They will have to come up with Plan B, which is containment, that of course is where Billie's empty threats come into play. The "Empty" is most likely the solution to the boys current dilemma, it's just a matter of when Sam and Dean reach that epiphany and how they end up getting both Amara and Luci there. I will say this, it's going to take both boys to stop Amara. The "Not John" vision in Baby specifically told Sam that it will take both of the boys to stop the Darkness. Last week, Billie, in her subtle way, told Dean the same thing. Dean had plead to Billie to bring Sam back because he was the ONLY one who can stop the Darkness. Billie had told Dean he was lying. She insinuated that he wanted Sam alive for him, but I'm not so sure that was the case. I kind of think that it was Billie's way of telling Dean that not only Sam can do it. Soon after that she uttered the words "Dean The Empty is waiting". If you ask me, I'd say that Billie pretty much just told Dean, that it's going to take both of them to stop Amara and the way to do it is by sending her to the Empty....after all it is waiting.

The second thing we learnt thanks to Crowley, is that Cas doesn't want out of Luci and I'm leaning towards thinking it has more to do with Cas giving up than it does believing that Luci is the only chance they had. It seemed to me that Cas was very happy in his little corner of his own mind within himself and it appeared to me that he has no interest of changing this situation. I think Cas wants out. I think he's given up on himself completely and just wants to hide from everything. I don't think Cas said yes to Luci because he believed Luci to be the answer, I think Cas has given up on himself and just wanted to run away and hide, perhaps Cas couldn't face the thought of failing once again. I don't know if Amara torturing Casifer to get God's attention will be enough to reach Cas and alter his attitude. I think this Cas needs a Winchester intervention if he's ever going to get his spark to fight back again.

I loved seeing MP as Luci. I gotta say, watching Mark has certainly solidified, that he and he alone owns the role of Lucifer. Only Jared came close to playing Luci with such perfection.

The notion of a "Chosen One" was mentioned. I'm kind of leaning towards it being Cas. I have no doubt that Sam and Dean will defeat Amara, but I think perhaps that Cas will be the sacrifice in order to do so. I think that little talk the boys were having at the end might be foreshadowing Cas' ultimate decision and they're need to respect it. That of course is just my little theory.

I will admit to being baffled by Dean's suggestion that they exorcise Cas before they give Luci the Hand of God to try and defeat Amara. After all this season has been about, after last week's ep and Dean's decision to save that couple, to do what Sam would want, despite his grief and horror at seeing his brother dead on the floor, Dean was willing to sacrifice and innocent vessel just so Cas can live? That suggestion has gone against everything the boys have done this season. It went back to half the bumper sticker and I was actually aghast that Dean would say such a thing. It bothered me that Dean was ready to sacrifice some poor innocent, when Cas, as Sam had duly noted, made the decision to be Luci's vessel. This not only went against the very mission statement the boys had renewed the vow of abiding by, but it diminished the very lesson Dean learnt when he possessed Sam with an angel. Was anybody else going....WTF? or was that just me? Then as we got to the end, and I gathered my thoughts, it occurred to me that the conversation at the end, was basically recognising Dean's automatic, and in this case, wrong response to the situation with Cas. This recognition made me feel better. It also had me thinking that it could be a bit of foreshadow and not necessarily regarding the decisions the boys might have to make, but regarding the fact, as I've noted above, that this time around, it might be Cas that ends up taking the hit for the team and humanity. We shall see I guess.

We have a bit of a break again and then we get back to what I regard as the meat and potatoes of Supernatural, a nice MOTW ep to give us the time to enjoy our boys doing what they do best....saving people and hunting things...before we get to the final eps where we get to see the boys save the world on a much more grander scale.