The Light on Spoilers, Heavy on Squee Preview of Supernatural 10x09 "The Things We Left Behind" 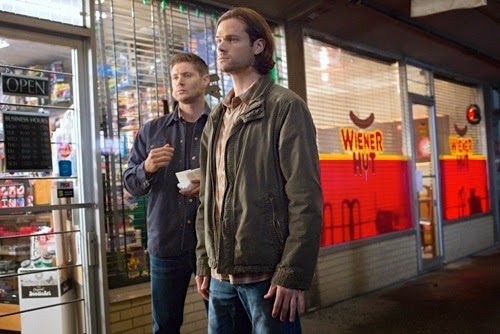 This is it people...the midseason finale! Eeeeee and squeeee and eeeeeeee and meep! I'm equal parts excited and terrified! I can't wait...but I'm dreading it! How very Supernatural!


Ex-Demon Dean has major tattoo regret called the Mark of Cain
Sam is helping his impetuous brother to try and find some removal options
Cas is singing one is the loneliest number
Crowley is battling inner demons in his inner demon
And Baby is so shiny!

Shit's gonna get real and possibly hit the fan! Duck and cover!

I actually have no clue at all what's going to happen in this episode! Well, except what the synopsis tells us... 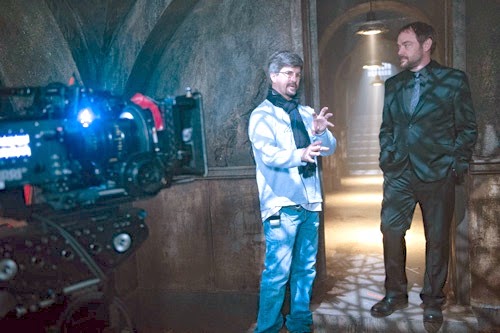 Castiel finds Jimmy’s daughter Claire (guest star Kathyrn Love Newton) in a group home and she convinces him to break her out. After she runs away from him, Castiel calls Sam and Dean to help find her before she gets in trouble. Meanwhile, Crowley faces his biggest challenge yet.

This was added from TV|Line - Dean finally makes a decision about the troublesome Mark of Cain plaguing him.

Okay so first things first...Guy Bee, yay! He's such a fab director and has done some great work on Supernatural. Then Andrew Dabb has been with the show since season 4, is an Executive Producer and the last episode he wrote was "Reichenbach" which was amazeballs! 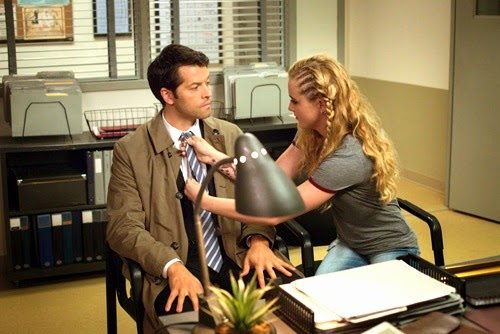 So, as we can see by the synopsis, everyone is in this episode! We get to pick up with Cas - last seen looking up Jimmy Novak online - and see where this journey has taken him. Well to Claire, who was also briefly Cas, so I guess she's going to know exactly what's going on! What Cas means to do when he finds Claire is anyone's guess. But Hannah's revelation regarding her vessel obviously struck a note with Cas, who is now out to connect with his vessel's family. This should be very interesting. Also, I wonder what Cas' mission is going to be now that Hannah has left? And I wonder how his latest injection of Grace is going. 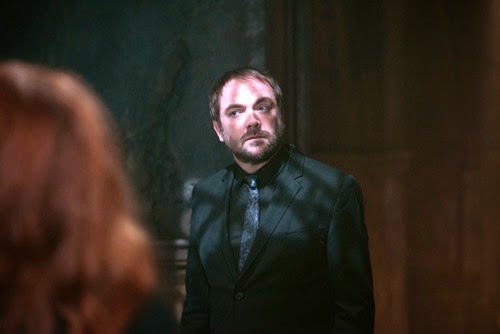 Since breaking up with Dean, in a BFF way of course, we've not seen too much of Crowley. We've seen that he's struggling with the day to day of running Hell, because frankly, if you've been howling at the moon with Dean Winchester, anything would seem dull! He repowered up Cas with some stolen Grace, which I'm sure is a favour that will require repayment. He still has that damn First Blade, which makes me crazy nervous. And his mummy, Rowenna returned. How that plays out is going to be fascinating, seeing as she's an all powerful witch and he's an all powerful demon. Is that his biggest challenge? His mum? I'm sure some of us can relate! 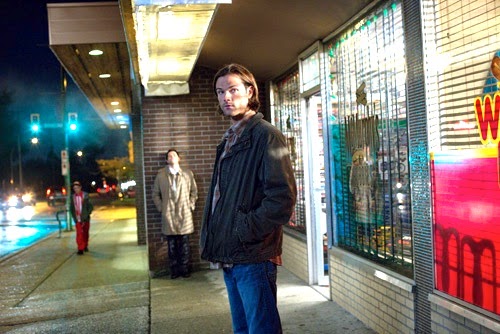 Sam and Dean are going to give Cas a hand with finding his wayward daughter, so we get to see Team Free Will in action again. And apparently, Dean is going to come to a decision regarding the Mark. I betcha that has something to do with tracking down Cain, as Tim Omundson has said that he will be back as Cain in episode 14. How the Mark is affecting Dean is hard to know...and hard for him to know too, by the looks of things. He's openly speaking to Sam about having the Mark (which is a nice change up to the usual Winchester methods), he's had a moment of extra violent violence when he emptied an entire gun load of silver bullets into the shifter...though he blew that off as being overly eager to make sure his first kill was a good one. He told Cole he's past saving...though he blew that off as just saying what Cole needed to hear. And he told Sam that the vampire kill in "Hibbing 911", was the first time he didn't feel like the Mark was pushing him...which must mean he felt like it was pushing him before. I think Dean is scared and unsure as to what's happening and what he's feeling and is trying to convince himself that he's okay, for now. But I think he's a very frightened boy and I think Sam's right there with him feeling exactly the same way.


On that thought...let's look at the killer promo!

Yeah, it's a cracker and left most of us in an over emotional state of emotions! I pulled the spot apart because I wanted to see what was going on in the fast edit section. All the violent shots of Dean/Demon Dean are from past episodes...so that was a bit of a relief...but the opening of the promo, with Dean surrounded by bloody bodies is gut wrenching. It's interesting that this promo is absolutely about Dean and Dean's situation - where as the synopsis for this episode certainly doesn't play up that angle of the story. 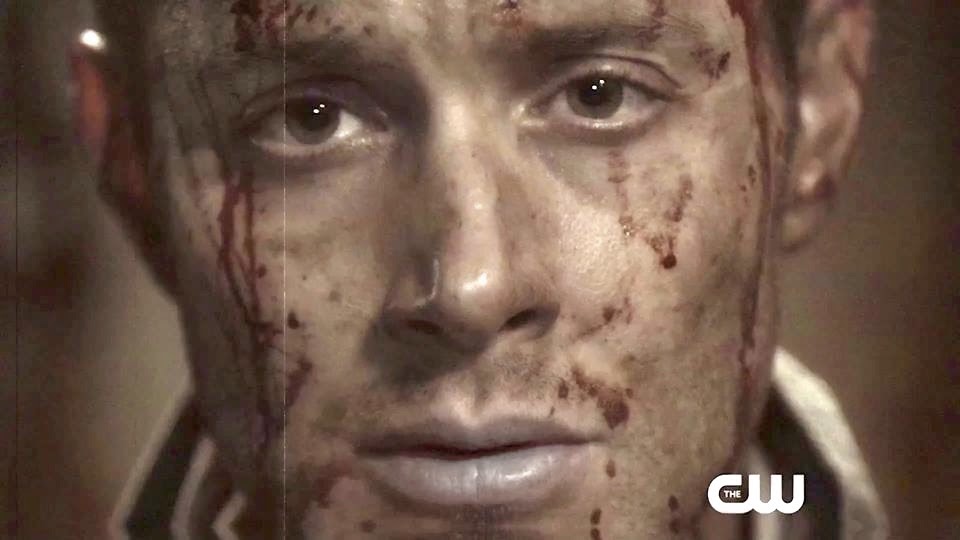 The bloody bodies scene is most likely a dream sequence (my bet, as we do see Dean wake up), or memories of something he did when he was Demon Dean - which we haven't seen much of, apart from Karaoke, getting laid and some demon kills. If it's the later, that's a hell of a thing that he's suppressing there, if it's a dream, well that shows exactly what the Mark is doing to his subconscious. Is it a dream of what he's scared he will do, or what he feels like he wants to do. The fact that he's asking Cas to take him out if he goes dark again...well that shows just how worried he is about what the cursed thing on his arm is doing or will do to him down the track.

There's some other trauma going on in there where Dean gets bonked on the head or something by the looks and Sam's grabbing his face just like he did not long ago when his brother...ack I can't even say it!

Crowley at the end there...my bet is he's talking to his mum.

Also, they're back at the Weiner Hut for some reason and I love that Dean takes the time to eat! Hey, at least he's eating! Eating is good! 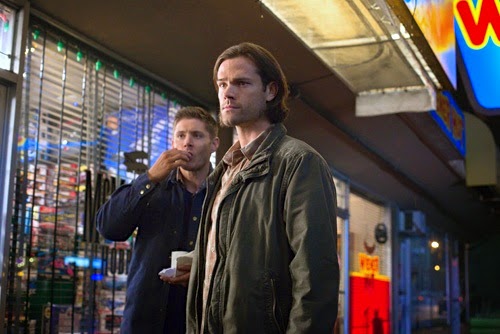 Let's look at the sneak peek...

I'm in love with every single second of this clip. It's beautiful. I love that Dean calls their get together a family reunion. I love Cas musing about the nature of ketchup - how Cas is that! I love Dean pinching Cas' burger - because obviously Cas isn't going to eat it! I love Cas saying he's entitled to a midlife crisis because he's so old. I love that when Dean tells Cas he's got to let it all go, Cas calls Dean out on not following his own advice. Dean's response is wonderful, with a self effacing grin "I ain't exactly a role model", but Cas' is better "That's not true". That totally throws Dean. He really doesn't know how to respond to that. If Dean Winchester doubted before whether he had people in his life that love him, he can't doubt it now, because he's surrounded by them. 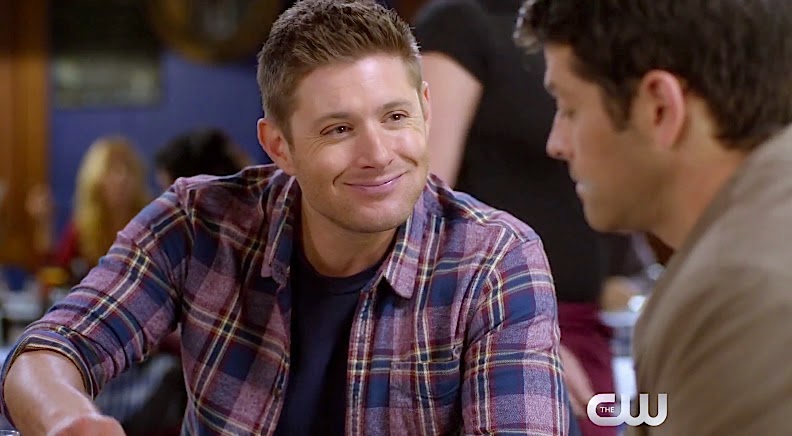 Then Dean gets serious. Asking Cas to take him out if he goes dark again...he can't be that thing again (oh Dean)...so he begs Cas to finish him if that happens, and to make sure Sam doesn't get in the way, because he'll try. What I adored about this was how positive Dean is that Sam will try to save Dean, no matter what. No matter what's going on with Dean, Sam will try to get in the way of Cas following through with Dean's wishes. Because Dean knows that Sam will do anything to prevent his brother dying. As sad and awful as it is to think of Sam going up against Cas to save his brother, the fact that now Dean knows and believes 100% that would be the case is wonderful. Not long ago, I'm not sure he would've felt like that. I don't think he would've been so sure that his brother would do anything to save him. But they're in such a different space now. Sam did not give up on curing Dean of the demon. He pursued him and persevered until Dean lost the black eyes. He's obviously worried as hell about Dean and is being openly concerned, but not pushing. He's said that they will tackle the problem together. And Sam has been beside Dean every step of the way, even to the point where Dean said outloud that he had people who loved him and wouldn't give up on him, while one of those people was standing virtually in front of him. It just struck me in this scene how confident Dean now is, of his brother's love. Ain't that nice to see!

Anyway, this scene is pretty much perfection in the banter, the dialogue, the performances and the emotion. Oh and the pretty shirt...because damn that's a nice shirt and it looks great on Dean! This one goes in my favourites pile with the red, white and blue checked one and the maroony red one (which I wonder if we'll ever see again, seeing as that shirt is now tied to Demon Dean.)

I don't think we'll see the scenario playing out that Dean discusses. I'm expecting the Mark of Cain to start kicking up a stink, but I can't see us going anywhere near where we went with it last season. I have a feeling they'll figure it out before it gets too bad for Dean...at least that's what I hope, because I haven't got over the last time...I don't think I can cope with that again!

So hold on to your feels my friends, it's bound to be a bumpy ride! I'll see you online for a group hug afterwards!
-sweetondean