The Light on Spoilers, Heavy on Memes... I mean...Squee Preview of Supernatural 11x08 "Just My Imagination"

Preview time! I missed previewing last week! Boo hiatus. BOOOOOO! And we're only 2 episodes away from the mid season hiatus. DOUBLE BOOOO! OMGGG THE AGONY AT THE THOUGHT OF BEING SEPARATED FROM SHOW MOST LIKELY IN AGONY!

There was this wascally wabbit
And then Sam mentioned the cage
And Dean was all... 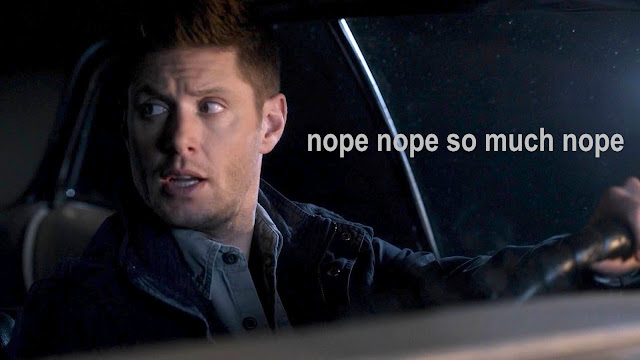 Imaginary friends coming back all non imaginary, and directed by THE TRICKSTER! YAYAY! 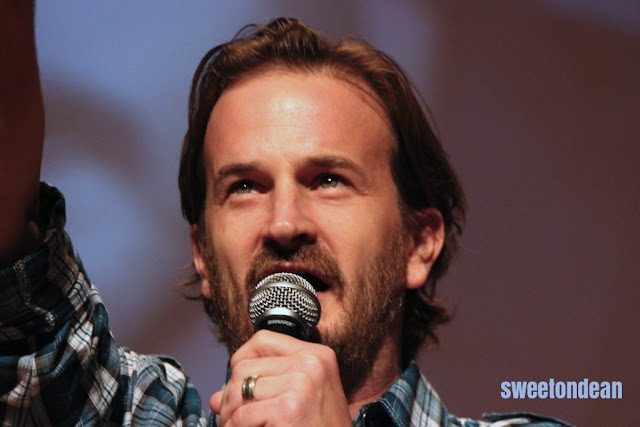 Did you know, I'm a really big fan of Richard's? In fact...and I'll say this in fairly solid confidence he'll never read this, because that would be massively awkward (though probably zero surprise to him)...I jokingly call Rich my "second boyfriend" - that Jensen fellow being boyfriend numero uno! Richard is pretty damn awesome... I love the Trickster, I love that the Trickster became Gabriel. I love Richard hosting the cons, singing with the band, impersonating Jensen...COMEDY ELBOWS...taking the piss out of the boys...BLAME THE MUSK... Plus, he genuinely seems like a good guy. Argh! I'm gushing aren't I.

When I did Jensen's meet and greet at Dallascon this year, it was just before Richard headed north to start working on the show as a director, and one of the fans asked Jensen what the boys had in store for Rich - seeing as they're known for their pie in the face antics! But Jensen didn't talk about pranking Rich, he talked about how much he admired Richard, that he admired and respected him creatively and that he's a huge fan of Richard's work. He said he was looking forward to being directed by Rich and seeing what Rich brought to the show. He also spoke about their friendship, and how as a friend Jensen was excited for Richard to have this opportunity, and also excited to have the opportunity to work with Rich again because he enjoys his company. I'm pretty sure none of that was what the fan was hoping to hear, but me? Well I was a puddle of awwwwww! Sitting there listening to boyfriend number 1 saying awesome things about boyfriend number 2!


'K so, I'm super excited that Richard got the chance to direct Supernatural. It's a SPNfamily thing and it's super awesome and I bet he directs again next season.

The other super exciting thing is that Richard is on his way to Australia and I'll be seeing him this weekend! Squee! So hopefully I'll get the chance to speak to him about his episode, and hear him talk a little more about it in detail! I'll be seeing him Friday night and Saturday at the All Hell Breaks Loose Christmas Special convention. The timing couldn't be better! 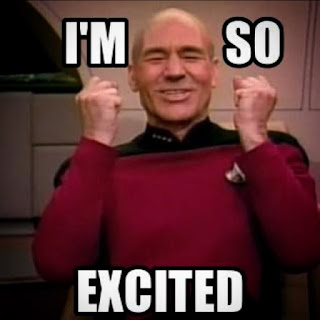 Okay enough fangirling.... WAIT...WHAT? THERE IS  NEVER ENOUGH FANGIRLING! But on to the episode anyway. Here's the synopsis!

Sam (Jared Padalecki) is shocked when his childhood imaginary friend Sully (guest star Nate Torrence) makes an unexpected appearance. Sam can’t understand why he’d see Sully now but what’s even more surprising is that Dean (Jensen Ackles) can see him, too. Flashbacks reveal young Sam’s friendship with Sully and why he needed him. Richard Speight, Jr. directed the episode written by Jenny Klein. 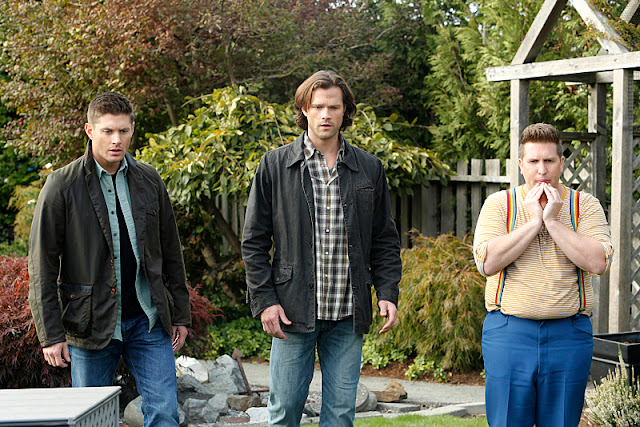 Don't you just love the sound of this! It sounds so ridiculously goofy...but also a little sad. There's a sadness to the fact that once upon a time, Sam had and needed an imaginary friend. *sad face* I hope we get into that a little bit. Why Sam created and needed Sully. It sounds like we will and it sounds like we're going to have some moments where Sam opens up to Sully and we hear some inner Sam stuff. This is from an EW article..

“It also provides a glimpse into Sam’s past and into Sam’s childhood and provides a Castiel for Sam almost,” Padalecki said. “Because we get to see a side of Dean when he’s with Cas that we don’t really get to see with Sam because Sam and Cas don’t have the relationship. But Sam and his childhood friend do have that relationship, so we get to see a cool part of Sam and see Sam admit to things that he’s not hiding from his brother but he just wouldn’t burden his brother with."

Plus we get flashbacks to little Sam (played by another young Sam because they keep growing up!) And our director, Richard said this in a TV|LINE interview...

...Viewers will discover “what was going on in the family dynamic that was making a young boy lean away from existing family.” “There’s something very sweet and telling about it. It speaks a lot to who Sam is now, the choices that he now makes and has made in the past.”

And this is from Jensen about how fun the episode is..

“ ‘Just My Imagination’ is really fun. I felt like I was on a sketch comedy show doing the show. One week I’m having a fight with two people inside the backseat of a car, and the next week I’m killing ghosts or saving somebody from pending death, and then the next week I’m in a room with an imaginary guy who’s dressed up like Bert and Ernie and we’re just riffing and having these awesome funny dialogue scenes.”

Sounds fantastic! And fantastical and wacky! And we get Dean in his dead guy robe with bedhead, and the guys in sweaters...SWEATERS!

LOOK AT THEM IN THEIR SWEATERS!!!

Here's the CW and CHCH promos!

It looks so adorable which kind of makes me think that at some point it won't be! With the midseason finale next up, well...I know you Supernatural, lulling me into a false sense of hilarity! I KNOW YOU! And you've made me paranoid quite frankly...so there's bound to be a punch to the gut, fo shizzle. I'm betting the ending takes a turn...

BUT mermaids...it's a blood bath! And Sully looks great.

And did I mention bed head Dean in his dead guy robe?!

Here's the sneak peek! WITH THE SWEATERS!

Strummer and McGowan... Wow. Great alias'! I'm assuming Strummer being the late, great Joe Strummer of the The Clash, McGowan being Shane McGowan of the Pogues. Did you know, Joe once filled in for Shane McGowan with the Pogues when McGowan couldn't tour? As well as producing one of the Pogues albums.  Just a bit of punk rock history for ya! Guess Ms Klein is a fan!

And here's The Carver's preview...

Awwww Sammmmmy! His watery eyes are going to make us sad! Also...NO TO THE CAGE, but I'm glad to hear the Darkness is just under the surface thoughout. And I dig that they find a reason in the lore for imaginary friends! Nice work, Show!

I'm kind of in love with Carver thinking the stories are weird! 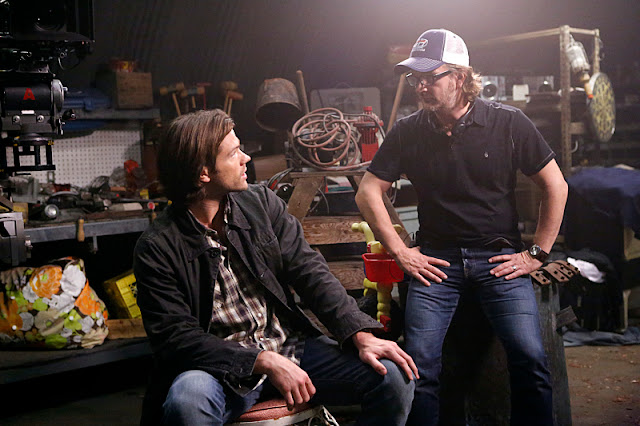 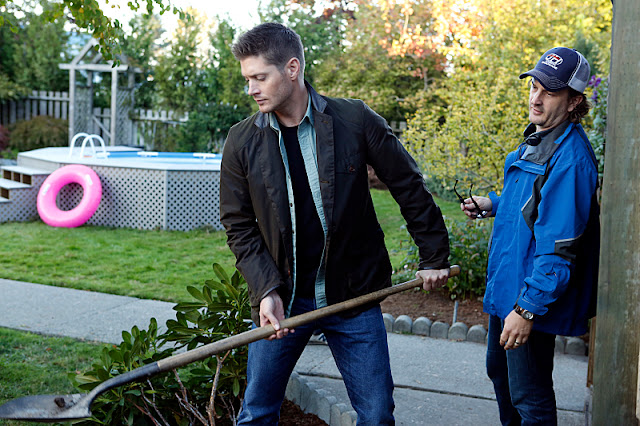 So a fun looking episode, made even more fun by the fact that one of our favourite Supernatural family members is directing! Go Rich!

We should enjoy the frivolity while we can...because shits about to get real, people! SHIT'S ABOUT TO GET REAL!